The SMB at Bands of America (BOA) National Championship

During a college football game, not everyone is interested watching the halftime show; many see halftime as an opportunity to head towards concessions or use the restroom, and many are talking as the band takes the field.

It’s very rare that a college band gets to experience a venue where every single fan is there to watch them perform. But every year, Bands of America (BOA) hosts events like this dedicated to the marching arts. Thousands of high school band members and their families gather to watch nothing but marching band.

Nobody is leaving their seats in the middle of the show and the crowd is completely quiet. Everyone sits anxiously awaiting for the next band to perform, no interruptions, no football, just music.

This is what it was like for the Spartan Marching Band as they performed as an exhibition band at the Bands of America Grand National Championship at Lucas Oil Stadium in Indianapolis on November 9th.

BOA hosts marching competitions all over the country, but this weekend’s competition included 108 of the nation’s best ensembles performing over the course of three days.

And this year, the SMB got to be a part of it.

This performance was the start of a marathon weekend for the SMB. The SMB traveled to Indianapolis that Friday, only to have a quick turnaround in order to be back and ready for the Michigan State vs. Ohio State Football Game the very next day. But despite the exhaustion, performances like BOA are what fuel these hard-working musicians.

As the entire crowd, including all those high school band members eagerly awaited the announcement of who made it into the semi-final round, the SMB took the field…

Performing their tribute show to the Circus featuring music from the movie The Greatest Showman, as well as music from Cirque du Solei, and the 1941 Disney Classic, Dumbo, with the song “When I see an Elephant Fly,” (featuring a flying Dumbo made by the band). For some, it was truly a once in a lifetime experience. For others, this was not their first time performing at Lucas Oil Stadium. Many SMB members have competed at various BOA events during their high school career, and many have spent their summers marching with Drum Corps International (DCI) performing at the DCI Finals in August.

Junior Baritone Ryan Malburg says this was his 8th time performing at Lucas Oil between various DCI performances with the Cavaliers over the past two years. He says, “there’s a special kind of feeling being inside this stadium, and stepping on that field feels incredible every time I’m able to. I had some of the best moments of my entire life, and have had many emotional performances at Lucas Oil. Being able to share this experience with the Spartan Marching Band was truly special, and was a memorable experience in an entirely new way.” 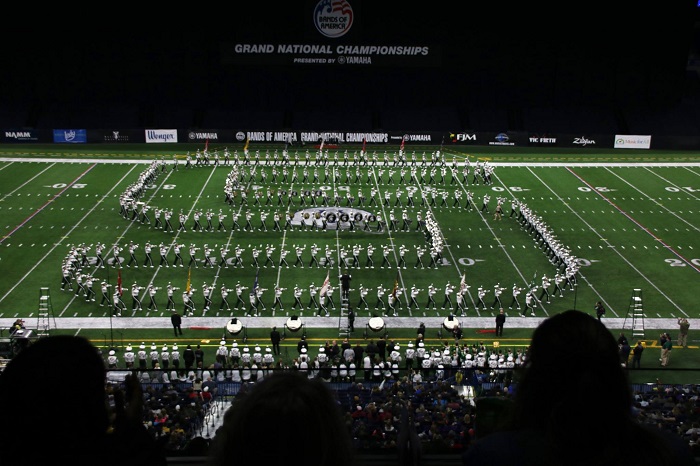 Sophomore Tenor Sax Dan Schneider shares a similar experience, but he has been fortunate enough to perform at Lucas Oil Stadium three times for the BOA Grand Nationals with his high school, as well as three times with the Legends Drum and Bugle Corps, making this performance his 7th at Lucas Oil. He says that “each performance is one of its own. Each time you take away a different experience that can change yours and other people’s lives.”

Freshman Tuba Shimon Likhtman was a member of a competitive marching band in high school that would perform at the BOA Regional in St. Louis, but he says that Lucas Oil felt different. “Lucas Oil holds a significance for competitive marchers; it’s where the best of the best go to compete. Although we weren’t competing it was quite the rush marching on that field of champions.”

Sophomore Color Guard member Alaura VanNest performed at BOA three times while in high school, and she said, “it was a great chance for me to actually experience the venue, rather than just experience my performance. It was a lot of fun knowing that there were high schoolers in the stands waiting to see us, and that my performance could really impact their future marching career.

While some had BOA or DCI experiences, others remember performing at Lucas Oil Stadium during the 2015 Big Ten Championship Game against Iowa. Senior Trumpet Anneliese Petersmarck, says that “The Big Ten Championship game was amazing, but I don’t think anything will compare to an entire audience who are there to watch bands perform, and who know exactly what goes into what we do.”

Senior Mellophone Bailey Barry says that “The Big Ten Championship game was like nothing else. It was my first performance in Lucas Oil and one I will never forget. Being back in Lucas Oil for BOA was amazing. The energy was just the same.”

Senior Trombone Adam Mackey adds that “It was a completely different experience. There’s a lot more commotion when it comes to the Big Ten Championship game, a lot more practice time, lots of fans from many schools, and it makes for an easy transition to it being such a big game and still on a Saturday.”

However, for the majority of the band, they had never performed at Lucas Oil before. A lot of people noted the differences in the acoustics that came from playing inside a large dome. Sophomore Trumpet Thomas Zambiasi said that he was most surprised by how much of the sound got lost in the dome. He said, “I haven’t performed in a band competition for two years, so it was definitely a little weird not having the big crowd noise or reactions that we’re used to in Spartan Stadium.” Senior Kelsie Montgomery adds that “The way the stadium was laid out was a little weird because mostly all you could hear was yourself and not the others around you. Normally I can hear our announcer just fine at the stadium but at Lucas Oil it was harder to hear him.”

However, Sophomore Alto Sax Nick Confer would say otherwise. He said that, “The acoustics were incredible! This was one of the first times I’ve been able to really hear myself playing during a performance with the SMB.”

Fifth Year Snare Jack Tallman adds that, “it was an echo chamber. The field feels bigger than what we usually perform on. The amount of seats is also incredible. There’s a very cool energy to the place; it makes you amplify the intensity you bring to the field.”

But despite the acoustics many band members loved every moment of their experience in Lucas Oil just the same. Junior Baritone Braedon Halle says, “it was really fun. The crowd was excited to see us and I was really amped up to perform for all the high school students. I think it was a really good experience and despite the lack of sleep I would definitely want to do it again.”

Freshman Tenor Sax Emma Bush says that “My first time experience at Lucas Oil was pretty unbelievable because I never thought that I would get the opportunity to perform in a situation like that. It was amazing to be able to make such an impression on high school bands that had never seen the SMB perform before.”

Freshman Trumpet Ryan Koschay says that “just walking out of the tunnel onto the field was exhilarating. The big ‘Bands of America’ logo hung up at the back of the field, all the people watching in the stands, and hearing them when we hit our big chords or made Dumbo; it all was quite a lot to take in at once.” 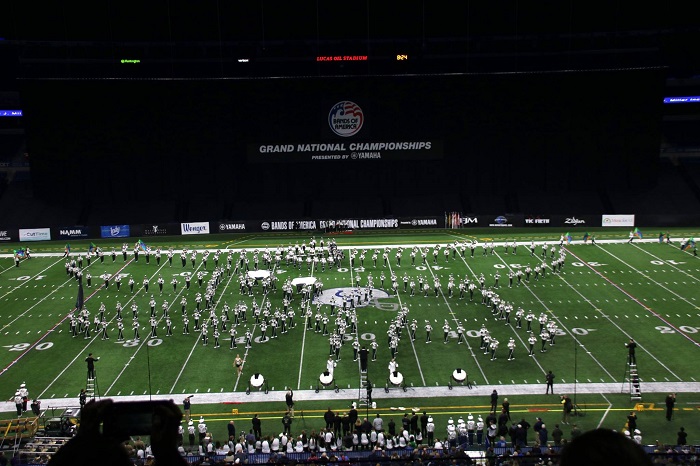 The SMB is filled with amazing opportunities and members get to experience events from an entirely new perspective. Performances like BOA create memories that will last forever…

And to think that they left Indianapolis Friday evening at 9pm, drove for five hours in the snow, got stuck on Farm Lane coming home, slept on the floor of Dem Hall, had a large family breakfast in the morning, then had an 8am rehearsal all to get ready to perform an entirely new show for the noon game against Ohio State. Regardless of however many hours of sleep everyone got, these are the memories that the members of the SMB will always remember, these perspectives that no one else in the world gets to experience day in and day out.