Today is about storytelling. It’s about letting the members of the SMB share their stories without me, the writer, getting in the way. 1200 people back for Alumni Band means 1200 stories, and while I wish we could document every single story from that day, here are a few incredible moments shared by current members of the SMB.

“I got to spend the weekend marching with my parents and it was a dream come true! Getting a picture of all three of us in our band jackets in front of the shield in Dem Hall was the second greatest thing that happened, the first being me getting to meet and teach all of the people my mom marched with, whom I had never met before. The 80’s Ladies were so sweet and ready to learn, and I really hope they all come back for alumni band next year.” 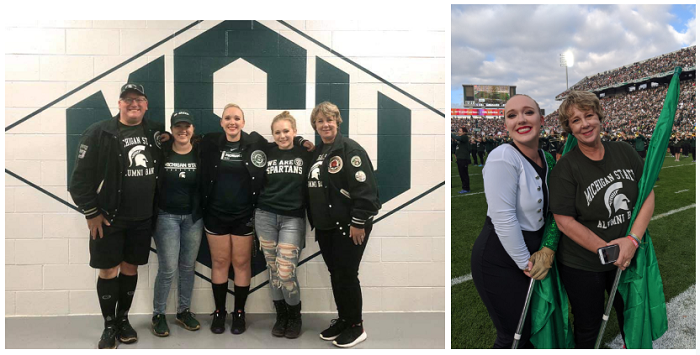 “Another cool thing was each color guard getting to “show and tell” our versions of the Series and the fight song. All of the alumni members were grouped according to when they marched, and it was so cool to see how both have changed and when those changes happened.”

“I just wanted to say that it was such an incredible experience to march with my high school band director, sister, and former high school classmates. When leaving the field from half time, my band director said “we just did our first show together!” and that was such a cool feeling.” 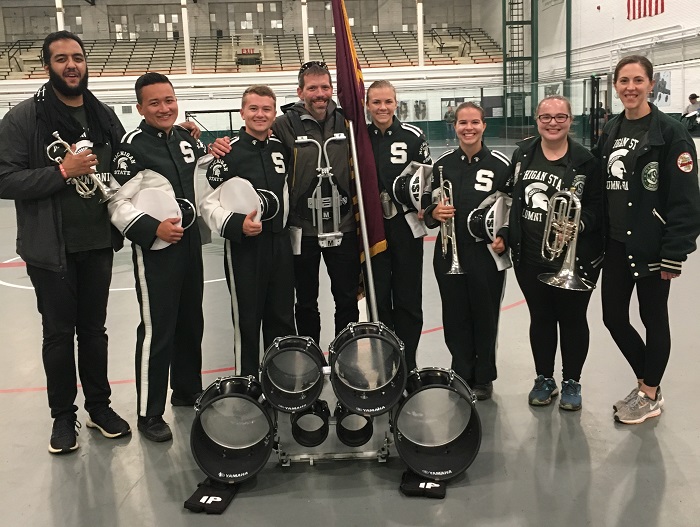 “Pujan, Sho, Ryan, Sam, Bailey and Riley went to Walled Lake Western High School where Patrick Dudzinski is the director and Mrs. D assists on the field. She is also the director of the middle school band that Pujan, Sho, and Ryan were in. It was such a cool experience to play together with all of these people.”

“My favorite part from this special weekend was circling up with 130+ current and former Spartan Bones. I had the unforgettable oportunity to lead these people in F tuning. I’ve never heard anything louder in my life. We followed that up with our trombone chant that we traditionally do on Adams Field. The alumni taught us youngsters previous versions of our chant. Getting to catch up with the former bones I knew was fun, but meeting alumni from before my time is what made that day special.”

Check out this monster sound here:

“For me, the best part about homecoming this year was seeing all of the alumni that marched so many years ago come back to East Lansing to be a part of this celebration, including former members that I had the opportunity to march with over the last four years. In addition to seeing some of the familiar traditions and new ideas that have evolved over the years, this halftime show was the largest halftime show that I’ve ever been a part of!”

Of the many moments we shared that day, the most unforgettable was singing and playing Shadows at post-game. Never had the stadium been so quiet with that number of people – 1,200 of them holding instruments, we might add. The Shadows’ 4-part harmony was rich and full. . . Director Bloomquist seemed to be pulling each sonority through a sea of sentiment… the transfer from vocals to horns was effortless, seamless, and beautiful. What finally got me was scanning the arcs at all the Spartan Marching Band Alumni creating that music, and then at the former Drum Majors before us. I had grown to love them. From meeting an old DM at rehearsal earlier that week, it was clear that we – and everyone else coming soon – were family. Holding them close after our songs is a feeling I will always carry with me. After that post-game Shadows released, there were families everywhere on our field.

“I was already feeling emotional the morning of the game before the full band reunited. There seemed to be a feeling in the air of ‘something great to come’ during our first rehearsal, like the field itself was preparing for an energy not yet seen anywhere before. When the alumni arrived, I began to actually comprehend the scale of importance these one hundred and fifty years of Spartan Marching Band has had.”

“This understanding was not fully recognized until the tail-end of pregame, though, when Prf. Bloomquist took to the ladder – alumni standing behind to support him if needed – and conducted our Alma Mater, ‘MSU Shadows.’”

“History drifted from his hands as he gave us that first downbeat. His face, lost in a calm smile that echoed the hundreds of times he’s led this song before, gazed across the band as he moved us through the first verse like an autumn leaf, dancing from its branch in a cool breeze. He looked at us from the eyes of a grandfather to child, but he hid a small glimmer as if to say, ‘I was you, and you will be me. We are the same in different times.’”
“I started to think about the past as we picked up that second stanza; how much influence he’s had on so many people – both band members and audience. I started to think about the future; Dr. Thornton standing in his position in fifty years, me in the stands. Tay would all be grown up then, her friends watching her grow and change into a beautiful person resembling her father, with ‘Bagel’ following not far behind. I thought about family; how much I want to stand with the new brand-freshman and promise that I would do anything for them like the past student-leaders before me. For the first time, I saw the band fully for what it was: an idea greater than itself; a family made to bring happiness to so many, and I cried. Sobbed. Tears poured down my face as we held the final chord, and when we counted those first counts to “Pregame Fight,” I forgot where I was.”

“I ended up missing a TTR completely after we finished playing “Shadows” with Bloomquist. I recovered pretty well, but my emotions were so strong that it clouded my muscle-memory of that drill, and I was the only one to make a mistake during that move. Am I embarrassed? A little, but I know that my error was for a good cause, and I’ll be sure not to make it again. For that game‘s recording, though, the bottom right of the “S” in Shield will have one dot spin a little late because he was crying too hard.”