A section deeply rooted in tradition, work ethic, and family, being a Spartan Tuba is considered one of the most physical jobs within the Spartan Marching Band.

“To be a Spartan Tuba, it takes mental and physical determination. This section is not for the faint of heart, as we have to have heavy instruments on our shoulders for almost two hours a day.” Senior, Matt Dowdy describes the endurance and physicality it takes to carry a 40-pound Tuba day-in and day-out. He says that on Gameday’s they’re swinging their horns, marching in formation, and when playing in the stands, most of the time they have less than three seconds to get their horn up ready to play.

Not only is the pure physicality of holding a tuba demanding, but so are the various performance aspects. The Tubas have a particularly rigorous version “The Series” or the SMB’s march to the stadium. Dowdy says that they lift their horns almost completely over their heads 11 times during one sequence of the series and four of those times they bring the bell down in front of them first – this is called a “Dip Flash.” 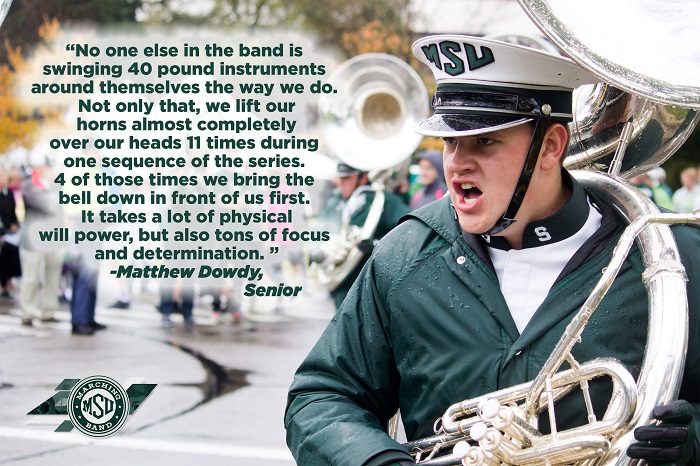 Tuba Series is taken very seriously. During preseason, the freshman tubas are taught “The Series” separately from the rest of the band to make sure they learn the rhythms, vocals, and all of the moves in a way that helps them manage the massive instrument on their shoulders.

Junior, RJ Dean says “A lot of time your tuba is barely even touching your body. Not many people have the pure determination to throw your tuba down to your legs and back up over your head in two counts.” He also says that while kick stepping their feet are in a resting position instead of moving, and they also don’t participate in the infamous “seven-ups” or various horn swings that you see throughout the band during Pregame. These adjustments are all in the name of making it easier to march with such a massive instrument on their shoulders.

But all of this hard work, determination, and strength just brings the section closer together.
“We are a very close-knit section,” says Dowdy, “having only 24 of us, it is comparable to a brotherhood or family of sorts. Most of the band spends time with their squads, and while we do as well, on many occasions the entire section is involved in social gatherings.” Plus, the Tubas have their own room inside Demonstration Hall where they store their uniforms and instruments that often feels like their own home away from home. 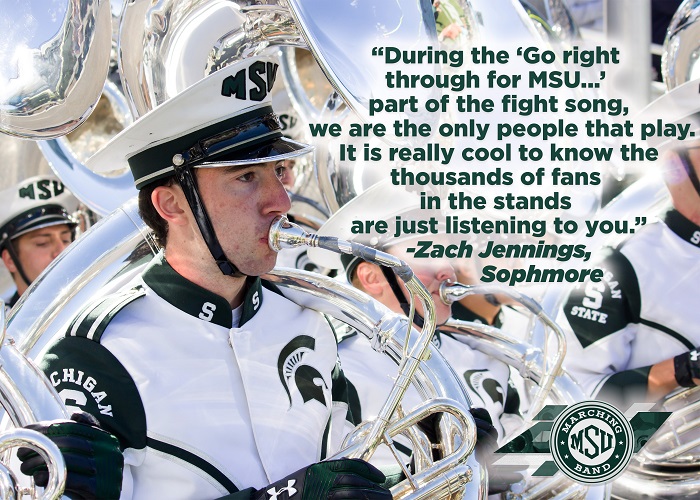 Other traditions within the Tuba Section are often encompassed in their Gameday experience. It starts inside Dem Hall as they all get their uniforms on – they play Gordon Lightfoot’s, “The Wreck of the Edmund Fitzgerald,” and sing along loud and proud for all to hear.

Afterwards, all the tubas go to the West Tower of Spartan Stadium and serenade the original Sparty Statue with a Tuba’s only version of “Spartan Fanfare”; a song typically played by the band after the football team scores an extra point after a touchdown.

Once they arrive on Adams Field and conclude their Gameday Warm-up, they all hook their pinky’s together and yell “Do It Up! As they prepare to embark on their iconic Tuba Series down West Circle Drive towards Spartan Stadium.

Being a Spartan Tuba is an honor, and the moment you become one, you join a family of musicians and bandos that truly love what they do. Sophomore Zack Jennings says that something that really sets the tubas apart is that “during the ‘Go right through for MSU’ part of Victory for MSU, we are the only people that play. It is really cool to know the thousands of fans in the stands are just listening to you.” The Spartan Tubas are extremely dedicated musicians, and it takes a lot to throw that forty-pound tuba over your head each and every day.