Thousands of faces, freshly mowed grass with stark white numbers, and an uncontainable energy. It’s almost impossible to describe the feeling of being first out of the tunnel at pregame.

And yet, freshman trombone player Madeline Shank does her best to explain.

“The electric environment of Spartan Stadium never fails to amaze me as I start kick stepping. Each time I move down the field in my green and white uniform, a new flood of emotions overtakes me,” Shank says.

“As the applause and ‘go state’ chants enter my ears, all is perfect; I feel at home, I feel like I belong, I feel like a Spartan,” she continues.

Shank feels fortunate to be in the second line of trombones that lead the band down the field during Pregame. At the forefront of it all, she is one of thirty-six trombones in her section.

Senior Kim Roe says she was in the front row of trombones coming out of the tunnel her freshman year. “Nothing will ever be able to imitate the overwhelming emotions of pride I felt. Ten days of preseason, hours of work, mental and physical exhaustion; it was all well-worth that split second of time before kick stepping out of the tunnel for the first time. I will remember spot 26C for the rest of my life.”

Because the trombones have longer slides, they are positioned at the front of almost every formation within the SMB. They lead the band down the street on Gameday, they lead the band out of the tunnel for every pregame, and they sit front and center in the stands. Due to their positioning, the trombones have embraced the phrase, “bones lead the way.” Working to not only be visual leaders, but also as examples and role models for the rest of the band.

Junior Viet Phan says, “We set the example and are often first impression that people get of the Spartan Marching Band. We try and be good role models not only to our peers, but to our audience as well.” Junior Ian Poage adds, “We pride ourselves on the effort and enthusiasm we bring to rehearsal, in addition to our pristine musicianship and marching technique.” 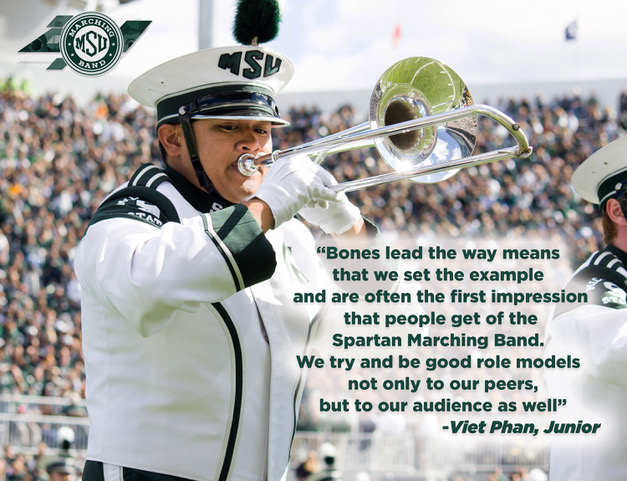 The Trombones emphasize how close they are as a section and recognize that they couldn’t be the successful section that they are, without the constant support, friendship, and family atmosphere they’ve cultivated. Sophomore Eiryn Hodges says, “Being a Spartan Trombone is like getting to be a member of a 36-person family who understand and care for you like you wouldn’t believe. For how big our section is, we are incredibly close.”

Senior Devon Davidson adds, “when I came into the section I was very nervous because I didn’t know anyone or anything about the university. But from day one, I felt accepted and we all became a family.” Not only are the Trombones close during rehearsal, many of them live together, and often go out to dinner on a regular basis. Senior Mikey Werth says, “We are always doing yearly events together and it makes for such a close bond between everyone. I feel like it’s what makes the section so tight. We have a history of always being close and it shows on the field with the way we play and march together.”

The family atmosphere has contributed to many of the Trombone Traditions. One of these is the dance to Earth, Wind, and Fire’s September – a dance that is now spread throughout the band whenever this famous song is played. Trombone Section Leader Troy Anderson says that “No current bones know the origin of this dance, but this tradition will never fade.” They also have a yearly “Bonesgiving” holiday event, and they always perform their rendition of “Low Rider” on Adams field every Gameday.

Perhaps the most beloved tradition is the “Triad” – a group of three trombones and one announcer that perform for the band while they stretch and prepare for their Gameday morning rehearsal. Triad member Ian Poage says that they play “songs that are relevant to the upcoming football game, news, or MSU events.” He adds that the songs are often arranged by students, and “the announcer, usually a trombonist with an especially ‘velvety voice,’ stands at very top of the scaffolding and cracks jokes through the band’s speaker system.”

But while the Trombones are deeply rooted in traditions, this year they decided to bring in something new to the SMB – four Bass Trombones. The Bass Trombone adds more depth to the ensemble and strengthens the low brass sound. One might even say they help lead the low brass sound. Ian Poage says, “As a bass bone, I can attest to the fact that these instruments and their players provide a certain power to the low-brass sound. Oftentimes doubling the tuba part, the bass bones create a low, edgy sound that really cuts through the ensemble.”

Troy Anderson says that, “As a true victim of the bass trombone sound, I stand right in front of them during concert arcs. The four bass bones consistently create a wall of sound behind me. I find it hard to keep my balance when their sound keeps pushing me forward. That’s how you know they’re doing their job correctly.” 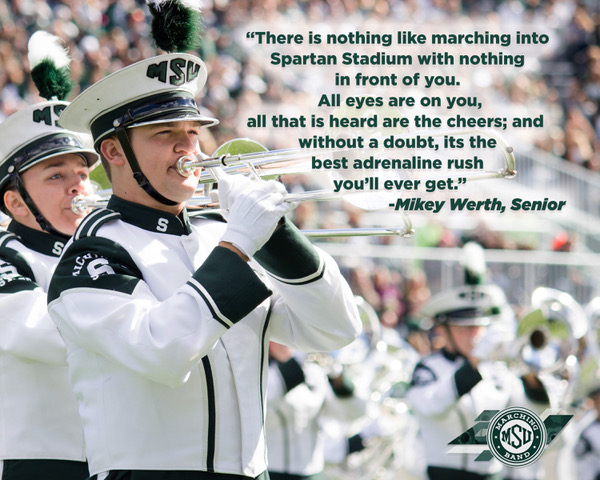 As one of the loudest, most dominating sections of the Spartan Marching Band, the trombones are constantly finding ways to push each other, work harder, and become a better family. They have the be the ones the pave the way down the street into the tunnel and onto the field. Mikey Werth says, “There is nothing like marching into Spartan Stadium with nothing in front of you. All eyes are on you, all that is heard are the cheers; and without a doubt, it’s the best adrenaline rush you’ll ever get – and the Bones are fortunate enough to be able to have the honor of leading.”