Many members of the SMB can pinpoint the moment they decided they wanted to march at Michigan State. Whether they had parents in the band, an influential high school director, friends in the band, or a general love for the art, everyone has their own story about how they earned a spot in the Spartan Marching Band. For many though, the community involvement of the SMB is what showed them more about the college band experience. While most bystanders only experience the “normal Gameday routine” of the SMB, there is so much more to their story than football. Fifth year Tenor Saxophone Section Leader Alex Klingel says, “we are a bigger part of the community than just musicians at a football game, and that makes being a member of the SMB even more special.”

While the Tenor Saxes try not to take themselves too seriously, they do try to make the most of their college band experience. They shared with us how the SMB has made an impression on the community and how they believe it’s made an impact on those around them.

Dr. Thornton loves using the phrase, “make an impression,” to inspire members of the SMB – especially before a big run through of pregame or halftime. Senior Squad Leader Aryka Thomson says, “he is reminding us that what we do makes an impact on other people’s lives. We want that first note to sound powerful and beautiful, our uniform to be clean and worn with pride. The goal is to show our talent and the results of our hard work inspire others to do the same.” The SMB spends hours upon hours every week perfecting their shows, and it’s all to help make an impact on at least one person in the audience. “It’s important to understand that Dr. Thornton is talking to the band as a whole when he says ‘make an impression’ not just individuals,” says Junior Squad Leader John Hindenach. “During a performance it’s very hard for a single member to make an impact, but if everyone gives their all then we can make an impact and I think that’s very powerful.” 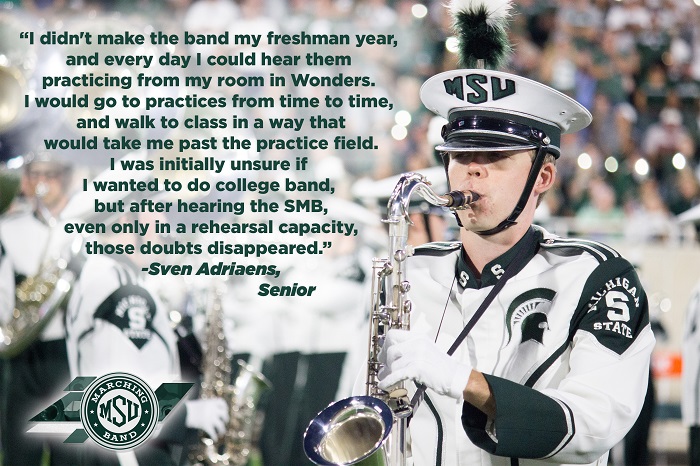 Senior, Sven Adriaens says, “everything we do should be treated as though it is affecting at least one other person even if we don’t directly receive praise in that moment. I didn’t make the band my freshman year, and every day I could hear them practicing from my room in Wonders. I would go to practices from time to time, and walk to class in a way that would take me past the practice field. I was initially unsure if I wanted to do college band, but after hearing the SMB, even only in a rehearsal capacity, those doubts disappeared.”

For many years now, the SMB has performed as the exhibition ensemble at the Grand Ledge Invitational, an event where several high school band students get to experience an ensemble of the caliber like the SMB for the very first time. Junior Ashley Hare says, “it’s great to be able to show them what we do, and often times people in their high school band will then set higher expectations for themselves and continue on with the music career.”
Sophomore Dan Schneider follows with, “They look up to us like we are a big brother or a mentor. They see what we are doing and they are blown away. Many students at the Grand Ledge competition are moved in such a way that it shapes their undergraduate career, whether that be joining the SMB tor even pursuing music here at MSU.” The Grand Ledge Invitational is often the epitome of finding a way to “make an impression” on an individual.

However, being in the SMB doesn’t just mean making a musical impression on someone, it’s also about finding ways to make a physical impression on the community. For the past 16 years, the Spartan Marching Band has worked in conjunction with mid-Michigan Sports Broadcaster Tim Staudt, and the Sparrow Children’s Hospital to host the “SMB For Kids” event, in which the SMB puts on a two-three hour benefit concert to help raise money for the hospital and for the SMB. Since its inception, the event has raised over a half a million dollars each for the Sparrow Children’s Hospital and for the SMB. Ashley Hare says that it’s an event that she looks forward to every year, and one of her favorite memories from her time in the SMB.

However, it isn’t just the big events that help make an impact in the community. Every week the SMB has extra gigs and performances that are outside of their normal commitments. Almost every Friday before a home football game, members go to the Spartan Hall of Fame Café and play rah-rah tunes and other pep band music for guests at the restaurant. On Gameday, there are several traveling groups that go around to different tailgates and play “Bandograms” for excited Spartan fans. The tenor saxes are particularly excited about gigs and extra opportunities to play. Section leader Alex Klingel says that “every opportunity that we get to venture outside of the band is an experience. There’s always a story to tell afterwards.” 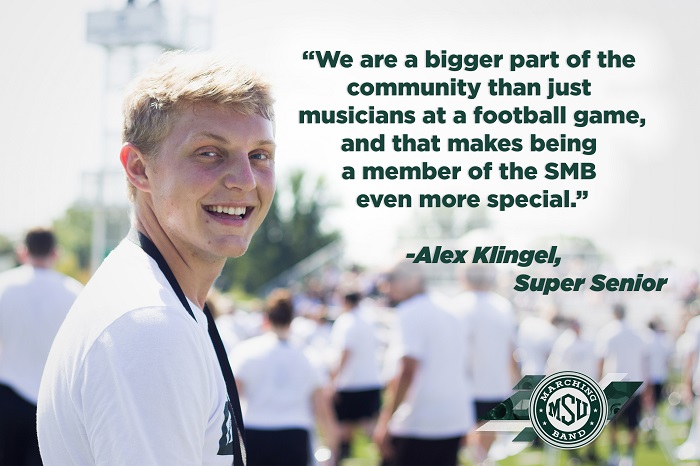 Gigs are also a way to go out and interact the Spartan community in a way you normally wouldn’t get to. Klingel says, “we don’t get a lot of interaction with fans, and when you’re out in a gig with a smaller group physically interacting with fans, you might get to see someone you know or strike up a conversation with someone new. It’s a heartwarming experience.” He also recalls visiting an Iowa tailgate tent a few years ago, and said they were able to play their fight song for them. “We got an opportunity to play for random strangers, and being able to bond with the Iowa fans as well as Spartans is a really cool experience.” But in closing, and in true tenor saxophone fashion he says, “I love gigs, gigs are great.”

The Tenor Saxes are constantly trying to find ways to reach out to the community and stay in touch with their alumni. Every year they hold a fundraiser to help purchase their tenor saxophone apparel for the new members. Any parents, friends, or alumni that donate receive a couple of recorded post-cards throughout the season as well as a few photos of the section thanking them for helping out. Throughout this process the Tenors are able to build a better relationship with their alumni while supporting their new members. The Tenors recognize the importance of giving back to the community after all of the support given to them and the SMB, they love any opportunity to make music for other people.

Every Gameday the Tenors play “Ditty,” – their own rendition of “Scotland the Brave.” They circle around alumni, fans, and anyone else that they can “corral,” play the tune, and eventually add their own dance moves as the song progresses. This tradition began in the 1990’s when some of the Tenors played “Scotland the Brave” to ironically poke fun of the Notre Dame Fighting Irish. For Halloween of 1998, many of the Tenors dressed up as the Irish Guard, and the following season this “Ditty” became a Gameday tradition.

The Tenor Saxes are constantly finding ways to give back and help support the community around them. Everything the Tenors do, encompass much of what the entire SMB stands for. Whether it’s making an impression on an eager high school bando, a Children’s Hospital, Spartan and Visiting Fans alike, or an athletic team, there is so much more to the SMB than Pregame and Halftime. Senior Aryka Thompson says, “The community looks to us as a symbol of pride for MSU. When we wear a band jacket, people associate us with hard work, passion, respect, and love for our school. Holding up those expectations by performing for and interacting with the community perpetuates this feeling of pride and shows the value of hard work.”