Before MSU was sponsored by Pepsi, beverages in the stadium were supplied by Faygo. Beginning in 1976, the baritone section periodically played the “Faygo Boat Song” for the student section in between third and fourth quarter. The song was written by two baritone section members, Matt and Andy James. The student section and band both loved the tune, and it was adapted into a marching band halftime show played by the entire Spartan Marching Band. In the early 2000’s, Faygo was no longer served within the stadium, but the Spartan Baritones continue to play the tune to the present day. 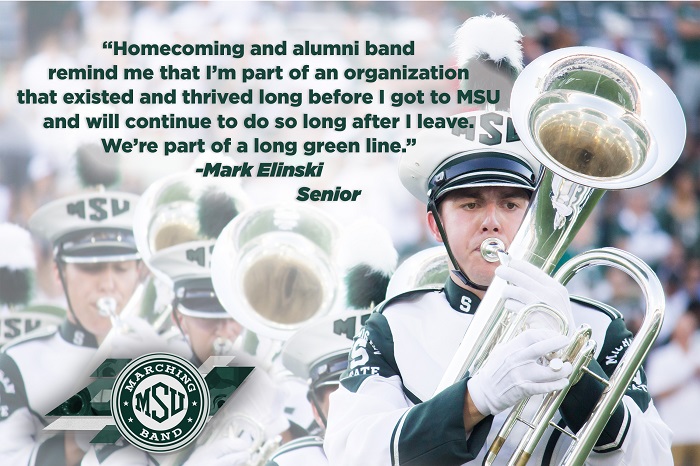 Faygo is more than just a song or beverage for the Spartan Baritones. It’s one of the things that makes alumni week special for them. The shared connection is why current members look forward to alumni band each year. It brings everyone together from all generations from within the band. 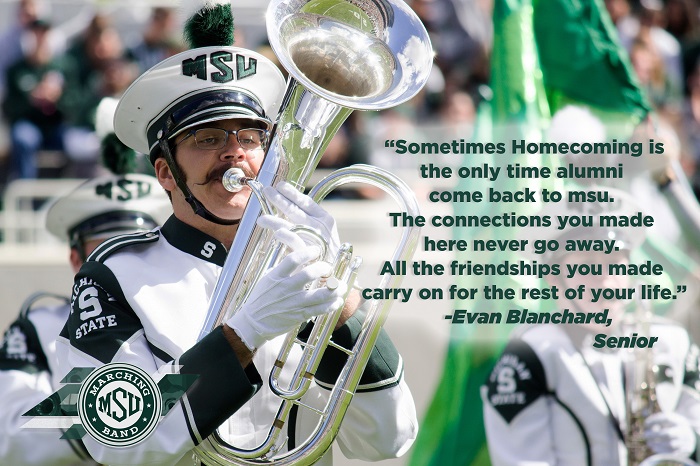 “Alumni band week reminds me that I’m part of an organization that existed and thrived long before I got to MSU and will continue to do so long after I leave. We’re part of a long green line” says Mark Elinski, a senior Chemical Engineering Major from Troy, MI.

“I always look forward to alumni band week. It’s a great way to reconnect with alumni I’ve met in previous years, see people I’ve been in the band with, and meet new people,” says Ryan Malburg, a Music Education major from Wixom, MI. “Every year, I am fortunate enough to connect with someone and learn a lot about the band and our origins.”

Evan Blanchard, a senior Physics major from Okemos, MI, says “Sometimes that’s the only time alumni come back to MSU. The connections you made here never go away. All the friendships you made carry on for the rest of your life.”