While many people often focus on the musical aspects of the Spartan Marching Band, for 51 years the SMB has been home to the Big Ten Flag Corps, a section that performs only during pregame, and is dedicated to representing all 14 schools in the Big Ten. While many of the members are primarily instrumentalists, some of them play instruments that aren’t part of the SMB such as Flutes and Clarinets.

Because the section is strictly marching-based, this allows for members to participate even if they don’t have any kind of musical background. Many are swimmers, runners, dancers, or have played other sports in addition to marching band. Some have never even been in marching band before. The Tens are a very diverse section and welcome people with all different kinds of backgrounds.

Every year before the season starts, the squad and section leader are voted on by the section and the elected squad leader holds the Michigan Flag, and the elected section leader has the honor of carrying the Michigan State Flag. The section is then split into two squads, State Squad and Michigan Squad. Each squad has nine members, seven of which consistently perform, and then each squad has an additional two alternates that audition every week for the Illinois and Minnesota flags.

Other flags are chosen based on an audition process that takes place during preseason, as well as another audition that takes place halfway through the season. However, a few flags require certain skills based on each member’s individual marching ability.

For example, the Ohio State and Wisconsin flags must be able to prance (similar to modified strut, or a high step that kicks out a little further) at a very high level because they have the farthest distance to travel. The Indiana and Nebraska flags must have a consistent step size because they are the dress point for each squad, meaning they are responsible for helping to keep the line straight as well as keeping the pace of the marching as they go down the field. Senior Section Leader Claire Kosky, says that “having ten-foot-tall spears with giant colorful flags makes each of us easy to spot, so it’s important that the entire section demonstrates correct technique and intensity at all times.” 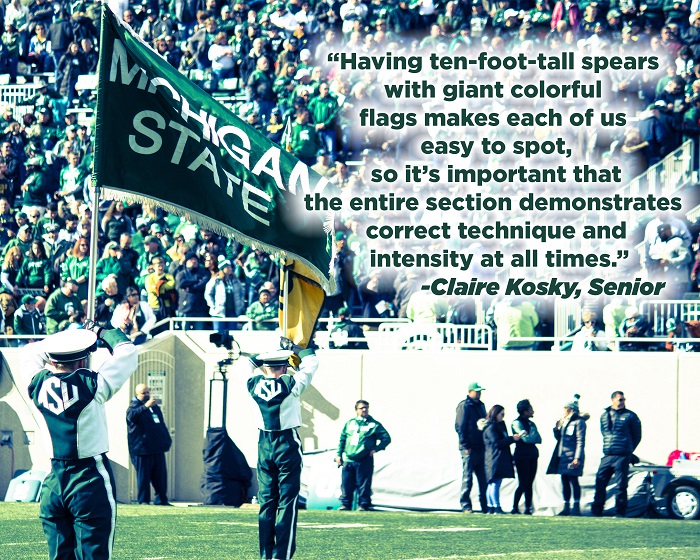 All of these audition processes are just one aspect of the deeply rooted traditions within the section. Second-year Alex Pomavile says “considering that we represent other schools besides Michigan State with our flags, there are a few traditions that we have in terms of flag care to make sure that Michigan State is honored above all others.” For example, “whenever the flags are not in use during the game, they are laid down and wrapped within the Michigan State Flag,” and anytime the band sings or performs ‘The Shadows’ all of the flags except the MSU flag are lowered to a resting position, while the MSU flag remains in the air.

On Gameday, many people look forward to the third-quarter cheer performed by the Drumline, but simultaneously, the Tens perform something equally exciting – the flag race. Pomavile says that, “during this, all Flag Corps members participate in a race where the Michigan State flag and the opponent’s flag are passed between groups for a race around the perimeter of half of the football field.” He also adds that legend says that “Michigan State has never lost one of these races.”

Throughout everything the Tens do, their motto is “First on, last off.” Fourth-year Aaron Meek says that this is “much more than just the format of our drill.” He adds that it’s a mindset that guides the section in everything they do. “In parades we lead the band to our destination, letting everyone know that ‘we have arrived’; in Pregame, we are the first people that the audience sees as the band flies out of the tunnel. We set the bar – in terms of intensity, talent, and pride – that the rest of the ensemble then follows. And at the end of Pregame, we are the last members of the band to kickstep into the endzone, maintaining the same standard of intensity, talent, and pride that we set for the rest of the ensemble at the start.” 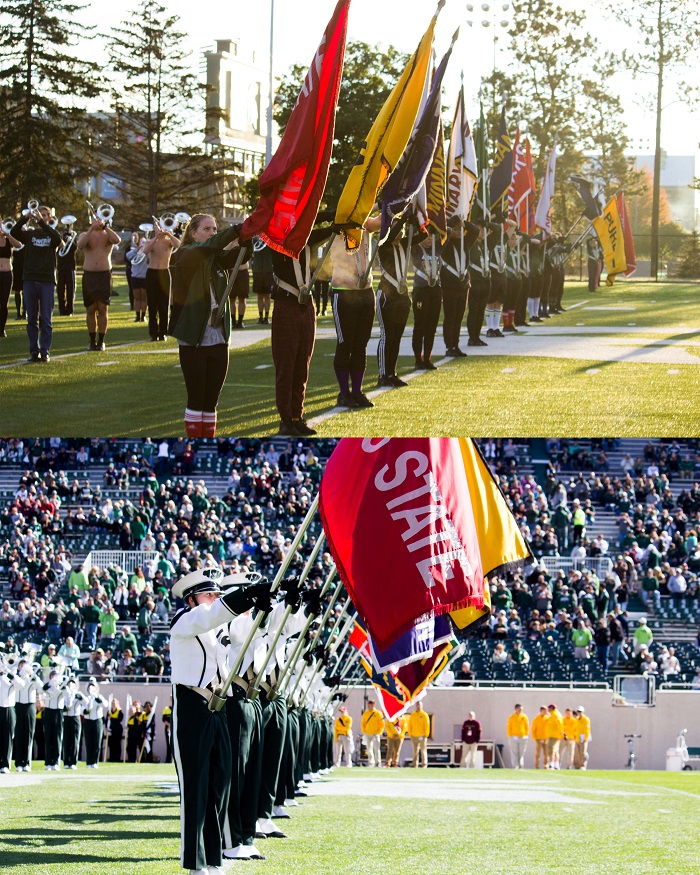 It’s a mindset that the section carries on to encourage people to finish as strong as they started. Through all of the physical and athletic aspects of the SMB, everyone has to push through the exhaustion, adrenaline, and physicality that often comes with being a member. As a very athletic section, the Tens are here to help set the standard and prepare the audience for the Spartans kickstepping out of the tunnel.

But throughout all of their constant hard work and dedication to the ensemble, the Tens are still as close as ever. Freshman Maddy Niblock describes the atmosphere of the section as “a great mix between high levels of intensity and an insane amount of fun. The tens know that when it is time for us to do ‘the thing,’ as we all call performing, we step up to the plate and strap on our game face. We get angry and focus in all of our efforts in order to perform to the absolute best of our ability. However, once it is time for us to relax, we have such a great time being one big happy family. The atmosphere in the tens is like no other and I would not trade it for anything.”