One of the most iconic symbols of any marching band is the drumline. An essential aspect of the Spartan Marching Band, the drumline helps keep the beat and continues to propel the ensemble forward day in and day out.

A foundational root of the SMB, the traditions within the drumline go back almost to the very beginning of the band when it was founded in 1870. But the key date within the drumline is the inception of “The Series” created by Merritt Lutz in 1966. Known today as the infamous March to the Stadium, “The Series” is a four-minute drum cadence accompanied by movement, choreography, and various vocals throughout the band. It is an ever-evolving part of the SMB with little additions and revisions each year, but the core foundation remains the same. 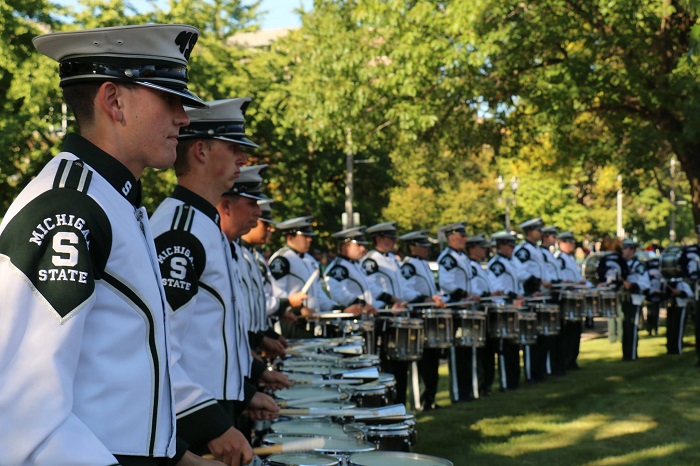 Sophomore Tenor Drum Ben Faupel says “the best part of the MSU Drumline is the relationships that you make. The crazy experiences that you have on this Drumline creates a permanent bond that nobody can replicate.” He adds that the “Drumline is very fortunate to have such a strong connection with our alumni, and the support that they give us is very heartwarming.”

Other prominent traditions within the drumline include performing at the Student Book Store on Gameday, performing the “Third Quarter Cheer” filled with choreography, tricks, flips, and other impressive exploits during the Game; and they are also known for their many iconic pieces including Martian Mambo, Ditty, and X.

Part of what makes the SMB as a whole so exceptional, is the individual commitment to improve all year round. For example, many band members participate in Drum Corps International, where several different corps and marching bands work all summer to travel and compete around the country. Another outlet for musicians outside of the SMB, is Winter Guard International (WGI). WGI is an indoor version of marching band with three different categories – Color Guard, Winds, and Drumline. 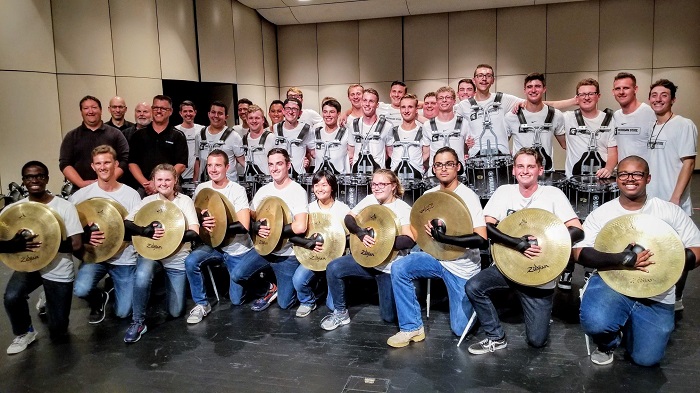 Many of the SMB drummers participate in WGI every year, and during WGI season, drummers travel around the country for rehearsals and competitions and often dedicate 6 months worth of weekends to the activity. Right now, WGI ensembles across the country are preparing for the annual WGI finals that take place in Dayton, Ohio at the end of the April. Sophomore Cymbal Inori Nakamura says that she personally loves the amount of body, visuals, and storytelling within WGI shows.”

It’s a drastic change and adjustment compared to the militaristic style of the SMB. WGI is often very artsy, expressionistic, and filled with dance and choreography as well as the normal drill formations like in any marching band show. However, the work ethic and training are just the same, everyone is striving towards perfection.

A big force behind the push towards excellence is Dr. Jon Weber, the director of the SMB drumline. Nakamura says that “his teaching methods and personality makes this Drumline not only fun, but the best. He’s an instructor whom you trust indefinitely, and you know he cares about the line more than anyone else.” It’s mentors like Dr. Weber that help carry on the fundamentals and push the drumline to be the best they can be. Nakamura says that “At the end of the day, I’m always proud to be in the Spartan Drumline, marching with people who really matter, and carrying the name of the Drumline to the next generation.”