by Ilene Gould and Leah Wright

Amidst all of the clean, militaristic lines of the SMB, the sparkles and glitter of the SMB Color Guard add a beautiful and colorful visual to every performance. But beneath the smiles, costumes, and flags, are some of the fiercest performers in any college band. Being in the Color Guard takes hours of preparation, hard work, and years of experience. We are lucky enough to have two fantastic color guard oriented organizations at Michigan State. The SMBCG that performs with the Marching Band, and State of Art, and independent winter guard that performs and competes during the spring semester all around the country.

Just a few weeks ago, State of Art competed at the WGI Finals in Dayton, Ohio and for the first time in Independent Open, a higher class ranking than in previous years. With a show entitled “I think…”, this theme surrounded the concept of how we form ideas and what do with them. Led by an instrumental and voice-over track, the show follows how we process ideas, how we figure out what to do with them, and eventually how collaboration and teamwork help ideas blossom and develop into fruition.

Junior English major Leah Wright, a member of both the SMBCG and SOA, says that she thinks this year’s SOA show really reflects the essence of color guard and marching band. She notes that the best part is when ideas help bring people together to collaborate and create the best performance and show possible. 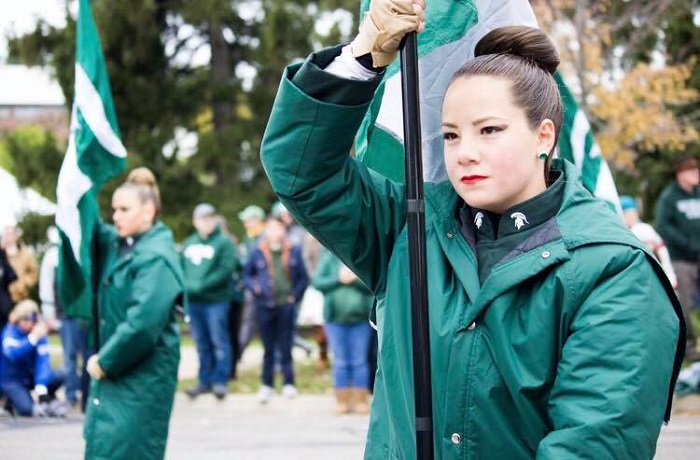 The best part about collaboration is when you can really see the audience participate and engage in the performance. Wright says that one of her favorite shows from the SMBCG 2019 season was the “Breakout Artists” show featuring music from Justin Timberlake, Michael Jackson, and Beyonce. The entire band performed a dance during a drum break of the song “Single Ladies” and the Color Guard was extremely instrumental in teaching the choreography to the band. Wright says it was really cool “to get that big response from that big of a stadium. It’s fun and new and people really enjoyed it.”

Wright also talked about the differences between performing in a winter guard and performing with a marching band. She notes that it’s really cool to see the audiences faces during an SOA performance, versus performing for a crowd of 75,000 people. The choreography is a lot more intricate and detailed in SOA because you don’t have to project to a stadium full of people. In the SMBCG the choreography is a lot larger and simpler to increase its readability to a that large of an audience.

Wright says that one of her favorite parts about being involved in both organizations is the evolution of technique. Wherever you march, you learn different styles and techniques with different types of staff members and teaching styles. This diversity makes you able to adapt and march anywhere outside of Michigan State, whether it be drum corps or otherwise, it helps make you a more successful performer. 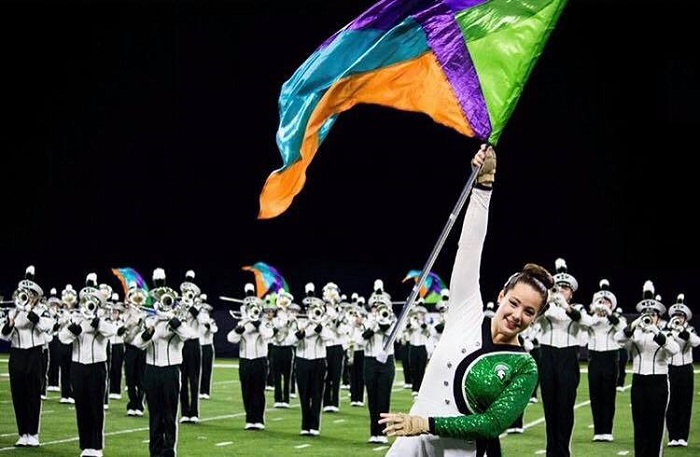 Like any other section in the Spartan Marching Band, the SMBCG has a lot of their own traditions that make them unique. Every year they give out the Maggie Martindale Award, in remembrance of a color guard member who passed away in the ‘80s, to a Junior in the guard who embodies her positive sunshine spirit. On their very first away trip every season, they take a moment to remember Maggie by taking a shot of peach juice before they get on the bus. Her favorite drink was Peach Schnapps and this is their way of keeping her spirit and memory alive. They also take a moment to remember former color guard director Orlando Suttles by passing out his favorite treat – lemon drops, as he used to say, “Life’s not that deep, have a piece of candy.”

The color guard is one of the most integral aspects of the Spartan Marching Band, and just over a month, they will be holding auditions to be a part of next year’s ensemble! Wright says to “Breathe and look up! One of the things we live by in the SMBCG is ‘fake it ‘till you make it.’ Color guard is fun and that’s what we’re all here to do.”

If you’re interested in auditioning, or looking for more information go to www.spartanband.net or check out the event on Facebook: https://www.facebook.com/events/1160124764148967/