From the electric energy of pregame, to the musicality and precision of the halftime show, the Spartan Marching Band strives to achieve the highest level of excellence. Every SMB performance is the culmination of hours of behind-the-scenes effort and planning, and often the individuals who put so much into the ensemble go unrecognized by the public. Today, we’d like to introduce you to one of these unsung heroes — Peter Clay, the Voice of the SMB. 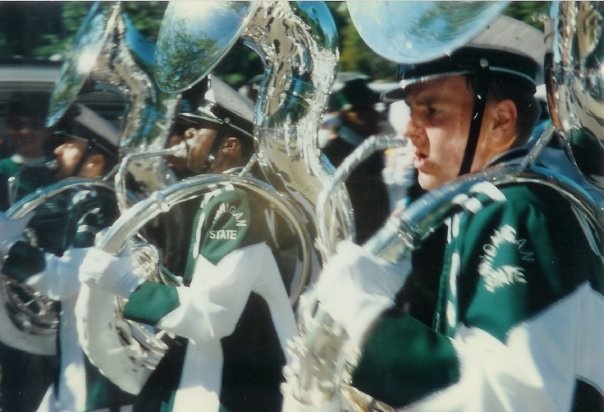 Peter Clay first got involved with the SMB in 1995 when he was a freshman in college as a member of the Tuba section. His sophomore year, he discovered a passion for telecommunications through his experience working at the WTIL Radio Station, and over the coming years went on to work at multiple area radio stations as a DJ and promotional assistant. Naturally, his personal investment in the SMB and his experience in the communications field made him a natural fit to be the ensemble’s announcer. Clay lobbied former SMB Director John Madden for the chance at the role, and eventually, Madden said yes.

Clay served as the voice of the SMB in the fall of 1998, but upon graduation found himself relocating to North Carolina to pursue a career in radio with a country music station, thus leaving behind his announcing gig with the SMB. But in 2006, when Clay returned to Lansing with his wife, Christie, and two children, Logan and Addy, he knew he wanted to reconnect with the Spartan Marching Band. “The SMB represented such a huge part of my time at MSU. I still had so much of that passion for marching band, and I would have done anything to be able to be on staff in some way.”

Clay has been announcing for the SMB for a combined total of thirteen years, but the thrill he feels when performing with the ensemble hasn’t diminished. He particularly enjoys introducing the band during pregame, and says it is his favorite part of gamedays. “I know it’s the same every game,” says Clay, “but the energy in the stadium when the band comes out of the tunnel… and when it’s time for me to say “Michigan State University is Proud to Present, the Spartan Marching Band!!!” It’s just indescribable. Not unlike how it felt to be on the field for that same moment.” 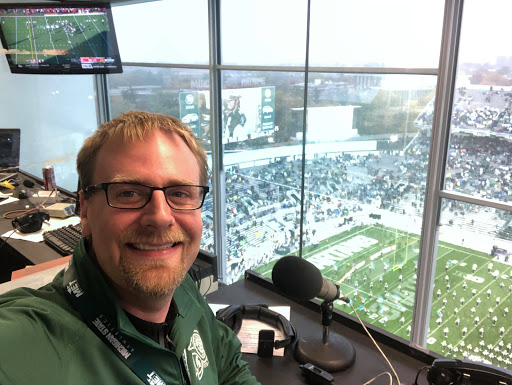 For all of the excitement that Clay feels on Gamedays in East Lansing, his most memorable experience as the voice of the SMB took place far from the press box of Spartan Stadium. In 2014, Clay accompanied the SMB on their trip to Pasadena, California, to perform at the Rose Bowl. “It was a lifelong goal to see MSU play in [that] game. And it became the goal to announce in that iconic stadium. It did not disappoint.”

Peter Clay’s voice has gained notoriety far beyond his work with the SMB, and is well known around campus and the Lansing area. His recognizable tone can be heard announcing for MSU hockey games, doing professional voiceover and narration work, and even singing in a band. Despite the fact that Clay juggles a full plate as a husband, father, performer, and Sales Manager for a TV station, he is still happy to make time to work with the marching band. “Being a part of the [SMB] is important to me.”

When asked what it’s like to be “The Voice of the SMB”, Clay had this to say: “Announcing in Spartan Stadium always gives me a thrill. I get to be somewhat anonymous, but also am an integral part of the show, without taking anything away from the band,” he says. “It’s probably the coolest thing I do.”

Peter Clay has become an essential part of the SMB sound, and our organization is privileged to have him on board.