As the army of trumpets charge down the field, you can hear the four part harmonies of the “Eef, Beef, Deuce, and Roosk” also known as the E Flat Cornet, the 1st, 2nd, and 3rd parts of the trumpet section. They are the musical leaders of the ensemble and the fiercest of fighters in the Spartan Marching Band.

A family of 60, the Trumpets are often joined at the hip. Junior Section Leader Jake Bronson says that “despite the size of our section, we spend so much time together that we really consider each other family.” Even if it means that “we have to claim an entire section of the cafeteria in order to sit together.” And if that wasn’t enough, every year after picture day, the entire section always goes to Cracker Barrel, nearly taking over the entire restaurant.

Rooted in pride for not just for their section, but for the entire history of the SMB, every Gameday the trumpets play the Michigan State College Alma Mater during their warm-up, a song not traditionally played anymore with the full ensemble. But before they can reach the ever-awaited Gameday, there’s an immense amount of hard work and dedication throughout the 12 days of preseason. 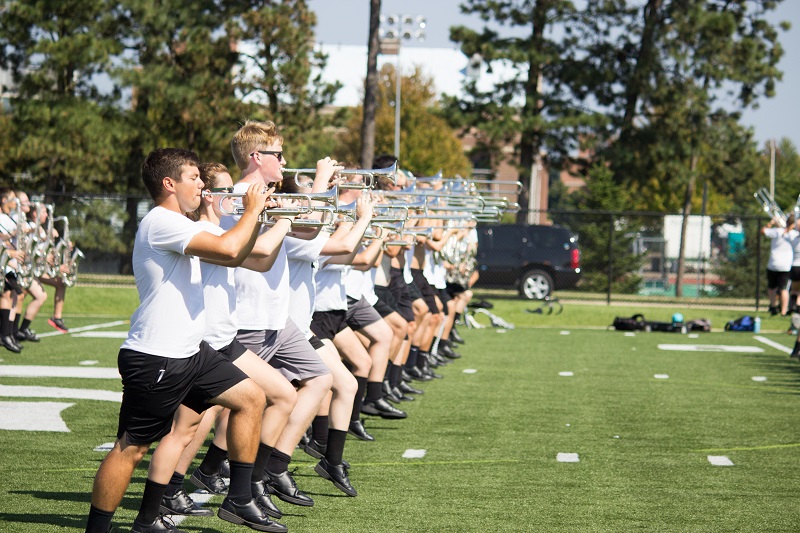 With 22 freshmen this year, over a third of the section, the leadership has not only stressed the importance of family, but the importance of building a “foundation” early on in the season. Bronson says, “everything we do during preseason is building for the rest of the season, whether it’s building skills and fundamentals for marching and playing, or learning the traditions and building the relationships that allow us to perform with such pride and passion at every game.”

With all of the hard work from Preseason culminating at Freshman Dress, the final rite of passage into the SMB, Freshman Joel Burns says that “it’s a time where freshmen are pushed to their limits,” and that it’s a time “to show the upperclassmen and squad leaders that we can do this on our own.” Junior Peter DeRoche says, “It’s such an awesome thing for the freshman to experience. I know I’ll never forget that night, and I can safely say I’m not alone in that statement.”

Preseason is so much about learning what it means to be a member of the SMB, embracing Spartan pride, and learning about the ensemble’s history and long-standing traditions. Bronson says, that his favorite memory from preseason was hearing the freshmen sing shadows after their first night of learning the series, the infamous SMB March to the Stadium. “We were all pretty exhausted and sweaty, but hearing them sing after putting in all that work together really filled me up with pride, and I got serious chills during the swell on ‘sing our love for alma mater.’”

The Spartan Marching Band is so deeply rooted in traditions and history, and the Trumpets will forever be charging down the field, as an army of sixty, but a family of one.