As a student group, the band had less rigidity in its uniform in its earliest days. The earliest uniform worn by the Cornet Band at the Agricultural College in the 1870s consisted of a white cotton cap and a pair of white cotton gloves, which cost each member 25 cents. When the band became a unit of the cadet corps in 1885, the Military Department issued uniforms to the band. The first uniforms were wool and dark navy blue in color with a half-inch black braid on the coat and a one-inch black braid on the trousers. This first cadet uniform cost each member anywhere from $14 to $20 and were intended to entirely replace civilian clothing while on campus. The cadet uniforms were not mandatory initially due to cost. 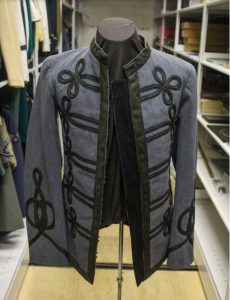 In 1892, the Board of Agriculture made cadet uniforms compulsory and replaced the old Civil War Blue uniforms with Cadet-Gray uniforms. Those already owning a uniform were not required to replace it for the new color, but all new members were required to purchase a gray uniform. In 1907, “MAC” was added to the collar of the cadet uniforms when the State Agricultural College became Michigan Agricultural College. The band uniforms were distinguished with a lyre detail. 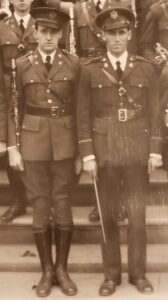 The J.H. Reed Co. of Philadelphia was contracted to produce new cadet uniforms for Michigan Agricultural College in 1911. The band’s uniforms remained the wool Cadet-Gray West Point-style uniforms through about 1920. Between 1918 and 1920, the band was allotted funds to purchase new uniforms. Campus opinion was that the band should have unique uniforms separate from the cadets, however the College required the band to maintain a common appearance with the cadets as part of the Military Department. The new uniforms were purchased in 1920 and consisted of “dress uniforms of khaki serge, with officers’ caps and spiral leggings. Cords of green and white on the left shoulder [distinguished] them from the regular military uniforms.” So, although the campus community did not get altogether unique uniforms, a splash of green and white added some school spirit to the band for the first time.

Over the course of the next thirty years, the band wore khaki cadet and ROTC style uniforms, with replacements every so often. In 1937, the band got a slight change to its look. The World War I-style officer’s uniforms, as had been worn since 1920, were retired. The new uniform consisted of “trousers, a shirt, a green and white lined overcoat cape, an olive drab cap, a Sam Brown belt, and a braided fourragere.”

Michigan State College was admitted to the Big Ten Conference in 1948, though did not begin conference play until 1952. In the period of 1948 to 1952, obtaining nonmilitary style uniforms was the top goal of most members of the campus community. Leonard Falcone wrote in a 1970 letter, “at that time, practically all university and college bands were wearing nonmilitary style uniforms with emphasis on the school colors.” Moving into a highly-visible environment in the Big Ten, band members sought uniforms that would stand out upon their debut in the new conference.

Colonel Dorsey R. Rodney, professor of military science and tactics at MSC, objected to new band uniforms as the band still had an active role in the ROTC and participated in weekly reviews, thus it was viewed necessary for the band to fit in with the Military Department through its dress. Lloyd C. Emmons, dean of the College of Science and Arts at MSC, also opposed the uniforms as the current khaki set were still relatively new. Even band members at the time had split opinions on new uniforms. Some liked the idea and thought the old uniforms were “drab” and dragged down the band’s ability to perform and stand out among its forthcoming counterparts in the new conference. Other band members were very tied to the tradition of khaki uniforms and preferred to maintain that look. 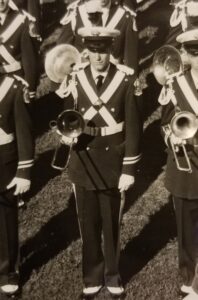 For about two full years, the uniform topic was debated on and off campus. The issue was taken to MSC President John A. Hannah in mid-1951 by Falcone. Hannah decided that whatever Falcone decided was to be the final decision. With Hannah’s backing, the State Board of Agriculture voted to fund the band uniforms in September 1951. As a result, a committee formed to design the new uniforms. The committee was made up of eight members from across campus, including band director Leonard Falcone, MSC athletic director Ralph Young, and a student representative, among others. Among the committee’s tasks was consulting on uniform materials and structure with Home Economics faculty members. 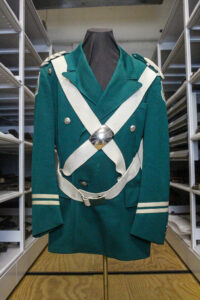 The Fechheimer Bros., a large Cincinnati-based uniform manufacturer, was selected to produce the new MSC Band uniforms in December 1951. The sample of the selected uniform arrived on campus in February 1952 for inspection. Once inspected, 160 uniforms were ordered including a drum major uniform. The new set of uniforms arrived on campus in July 1952. These uniforms were a vibrant shade of green and were accessorized with a white cross strap, white spats, white gloves, and an officer’s hat with a green and white feather plume.

The band made their fall premiere on September 2, 1952, in Ann Arbor at the Michigan-Michigan State game donning their new green and white uniforms. Fritz Stansell, a member of the 120-piece 1952 SMB and eventual founder of the Blue Lakes Fine Arts Camp, recalled the first performance wearing the new uniforms, “when we ripped out onto the field at Ann Arbor with flashy new uniforms, a fast tempo, updated arrangements, kick turns, high steps, etc., etc., the MSU fans gave us a terrific reception. The attitude that the band was out of date changed overnight.” The 1953 MSC Wolverine yearbook noted that the band’s first appearance in new uniforms in Ann Arbor “[stole] the thunder from Michigan’s famed marching unit.”

This inaugural green and white uniform set was worn at two Rose Bowls and, for the final time, at the 1964 World’s Fair. After twelve years of continual use by the SMB, the uniforms had become worn and tattered. The band received so much attention that in January 1964 President Hannah received letters criticizing MSU for allowing its band to perform in such shabby uniforms. Hannah, along with Falcone’s support, immediately took steps toward funding new uniforms for the band. 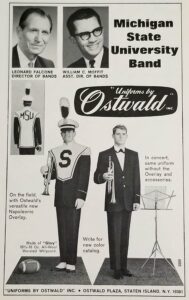 The process for obtaining this set of uniforms was much smoother than a decade prior. The new uniforms were designed and manufactured by Ostwald and premiered in the fall of 1964. They were a dark forest green wool uniform with a white vinyl overlay with fringe shoulder detail. A large block-S was emblazoned on the front of the overlay, and a shield-MSU on the back. This was the first time the shield appeared on the back of the SMB uniform and it remains a feature today. Zippers replaced earlier button closures on this new set of uniforms. When the overlay was removed, the uniform could be worn as a concert dress uniform. White hats with green and white plumes completed the marching band look.

A “Uniforms by Ostwald” advertisement highlighting the new convertible SMB uniforms is shown at right.

Among the first major showcases of this uniform was in the 1965 inaugural parade of President Lyndon Johnson. The set was also worn at the 1966 Rose Bowl. These uniforms were worn until 1974. The lifespan of a band uniform is approximately a decade, and in this case the vinyl overlay was not highly favored anymore.

In 1974, the old overlay uniforms were retired and Ostwald designed and produced a new set of uniforms for the SMB. The major features of the new uniforms were a unique shade of forest green highlighted with silver accents. The MSU-shield remained on the back of the jacket and a shield was added to the front of the uniform hat, where it remains a feature today. This uniform also features a unique diamond shaped “Michigan State University” patch on the shoulders.

The 1985-1994 SMB uniform is distinguishable by its long jacket with white outward “swoops” on the front. This uniform laid the foundation for its successors in its design, including “Michigan State” on the shoulders and a Spartan-S on the jacket chest.

The 1994-2003 SMB uniform has a similar look to its predecessor. The jacket has the green and white areas reversed and lacks the “swoop” design on the front. This set is unique, however, in that it is the first with interchangeable pieces. This uniform came with one jacket and two pairs of pants – one green and one white. This jacket continues the “Michigan State” shoulder design and Spartan-S on the chest.

The 2003-2013 SMB uniform is the first with a cropped jacket. The jacket design also features a flap which camouflages the front zipper. This set had one pair of green pants and two interchangeable jackets – one green and one white. The “Michigan State” design remains on the shoulder and Block-S on the chest.

The SMB uniforms which debuted in 2013 and are currently in use have the same design as its immediate predecessor with a few minor additions. Among the additions are Spartan helmets and block-S details included inside the “Michigan State” shoulder design. This set also has one pair of green pants and two interchangeable jackets – one green and one white. The white jackets feature a Spartan helmet on the chest and a block-S on the shoulder, the green jackets have a reversed design with a block-S on the chest and Spartan helmet on the shoulder.