The Agricultural College of the State of Michigan was established in 1855 and classes began in 1857. There were no musical instruments on campus in the early years. If a student knew how to play an instrument, they arrived on campus already with the talent. The long-held story of the beginnings of the marching band on campus is that of Ransom McDonough Brooks and the band of ten Civil War veterans who assembled in 1870 for the first time.

The Brooks tale has its origins with Dr. Frank Kedzie, professor and future MAC president, as told during his time as College Historian. Kedzie grew up on faculty row with his father, chemistry professor Dr. Robert Clark Kedzie. Frank graduated from the State Agricultural College in 1877 and told this story from recollections of his youth on campus. The earliest located instance in which Kedzie’s story of the band’s origin was published is in The State Journal in 1929.

Outside of the Kedzie account, there is a document which suggests an earlier ensemble existed at the State Agricultural College. In 1868, The Bubble, the first ever student publication, made the earliest mention of a band on campus:

“We were honored with a serenade the other evening by the band that belongs to this institution. They have made rapid progress since their organization, and now we guess play remarkably well.”

The year 1872 marks the first instance in which the college faculty recognized a band on campus. The faculty sanctioned a band trip to Pine Lake (now Lake Lansing) along with the sophomore class.

Due to the informal nature of the early band or bands on campus, records do not exist. This makes selecting a definitive account extremely difficult. It is plausible that a band was organized, fizzled out, and reorganized more than once in this earliest period.

As the 1870s progressed, the band’s activities grew. In the period of 1874 to 1878, the band maintained about fifteen members. By 1875, the College Band was granted use of the attic of Williams Hall for rehearsals each Thursday and Friday evening, 4:30 p.m. to 6:00 p.m. They most often rehearsed on the roof of Williams but used the building’s tower in inclement weather.

The first informal uniform worn by the band included a white cotton cap and a pair of white cotton gloves, costing each member 25 cents. The early instrumentation was 3 cornets, 2 altos, 2 tenors, 1 tuba, and 2 drums.

Among the earliest performances given by the band were public concerts in the College Chapel, paid engagements at the Lansing Fair, Lansing’s Decoration Day celebrations, and statewide excursions. In 1876, the band first appeared in the college catalogue, indicating that the group was formally sanctioned by the school. In this era, the band purchased instruments for the College, accruing debt. Over the course of 1877-1878, band subscriptions were solicited which allowed the debt to be paid down and additional funds raised to purchase desired instruments and sheet music.

Even from its earliest days the band had many supporters. College president Theophilus Capen Abbot was a major supporter of the band, his son Rodney was even an early member of the band. President Abbot even accompanied the ensemble on off-campus concerts on occasion. Several faculty members in this era had children who became band members. 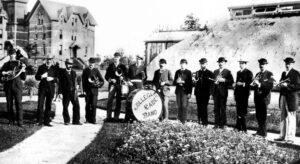 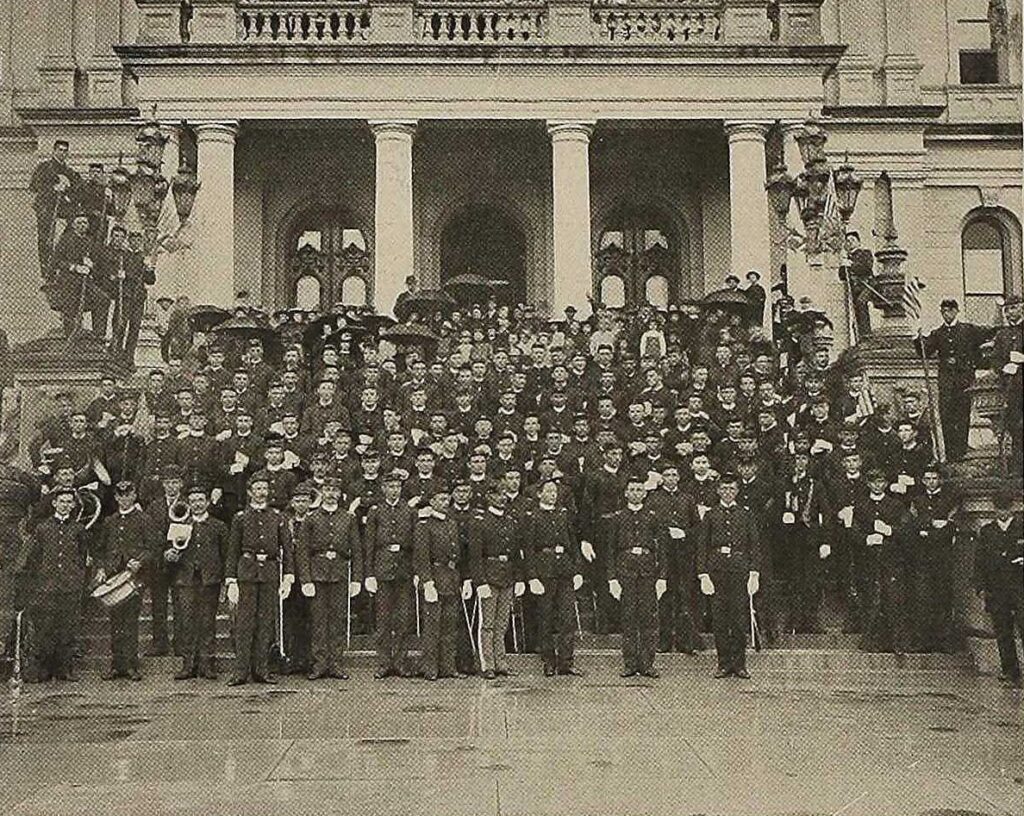 Agricultural College Cadets and Band, on the steps of the State Capitol, 1890

To house the new Military Department, a College Armory was built and opened in the fall of 1885. The field west of the Armory was leveled for use as a parade and drill ground in conjunction with the building’s construction. The Armory stood until the 1930s when the current Music Building replaced it. The field to the west, now known as Adams Field, has been used by the band as drill and rehearsal grounds since its leveling in the 1880s.

The band was placed under the instruction, drill, and control of the Military Department in 1885. The Armory served as equipment storage and rehearsal space for the College Cadet Band. Despite the band’s assignment to the cadet corps, they remained without a director for decades. Also in 1885, the band was assigned its first full uniform. Each year, the band was placed under the leadership of a student. A few early drum majors were: J.H. Wheeler, 1887; H.H. Hunter, 1888; and H.F. Hall, 1889.

In the fall of 1888, compulsory military drill boosted the band’s numbers. By 1890, the new head of the Military Department, Lt. John J. Crittenden, recommended to the Board of Agriculture that the band be discontinued. That recommendation was heeded and the band was briefly replaced by a drum corps in 1891, viewed by Crittenden as a less expensive and less difficult alternative. Under a new Military Department head in 1892, the band was reinstated. Uniforms were made compulsory in 1892 and a new full set of instruments were purchased in 1896.

At the State Agricultural College commencement exercises in June 1900, the band performed before Dr. Booker T. Washington, prominent African American leader and head of the Tuskegee Institute, who gave the commencement address entitled “Solving the Negro Problem in the Black Belt of the South.”

The Semi-Centennial Celebration of 1907 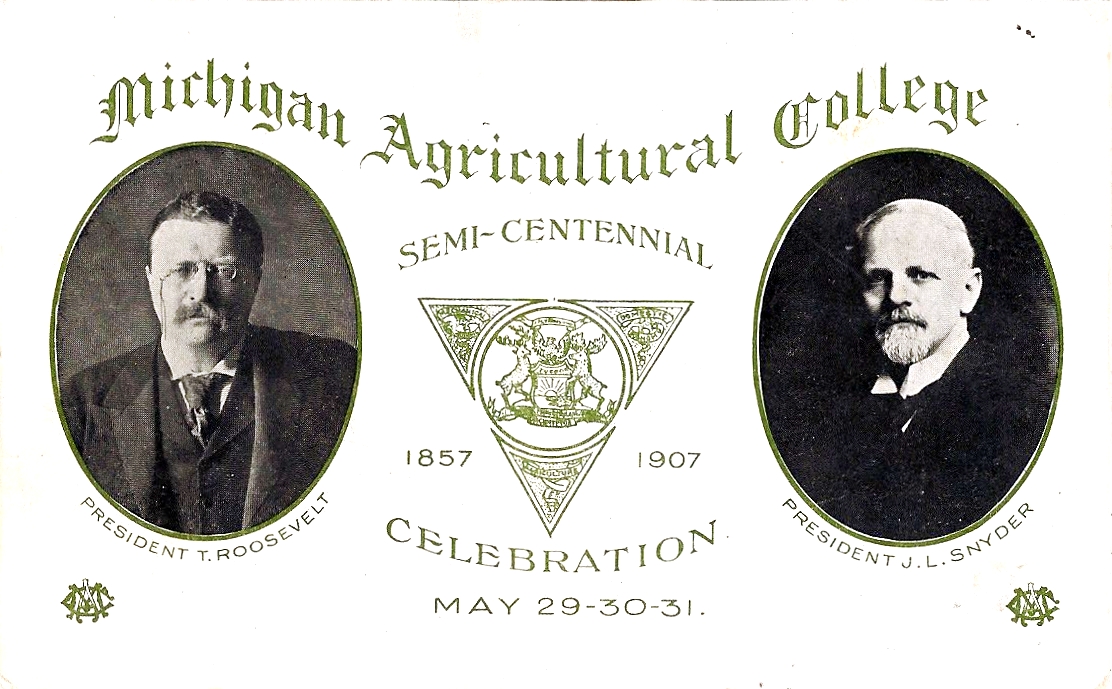 Around 1905, the Military Department increased its calls for the band to have a faculty director due to a lack of discipline that had developed. Numerous incidents corroborate the assertion that the band was undisciplined. In the weeks leading up to the College’s fiftieth anniversary celebration in 1907, the band began to object to their participation in the activities. The State Republican newspaper reported that College administrators caught wind of the band’s conduct and took action. It was alleged that the band demanded payment for their performances. They are said to have been inspired in their demand by the visiting Milwaukee Symphony Orchestra, which paid its professional performers. The band was also displeased with the lack of support they received from the student body, who never attended concerts but demanded the band’s presence at athletic events. Band members in this period were compensated by the Athletic Department for their performances at football games with free season tickets as the band only played at two games and could attend all others with their complimentary tickets.

College President Jonathan L. Snyder formed a disciplinary committee to investigate the matter. Three members of the band were identified as defectors, who refused to perform for the semi-centennial celebration. It was made clear to the band that all members should be present and participatory, however those three students did not participate. All three were suspended for one term, with just two of them returning to school subsequently. The band’s strike is said to have delayed the parade, but it went on as planned with the remaining band members leading the processional down Michigan Avenue from the State Capitol to East Lansing.

The College’s semi-centennial marked the first time the band played before a President of the United States. President Theodore Roosevelt came to campus to give a commencement address and commemorate the fiftieth anniversary of the school’s founding as the pioneer land grant college. President Roosevelt also handed out the diplomas to the Class of 1907. 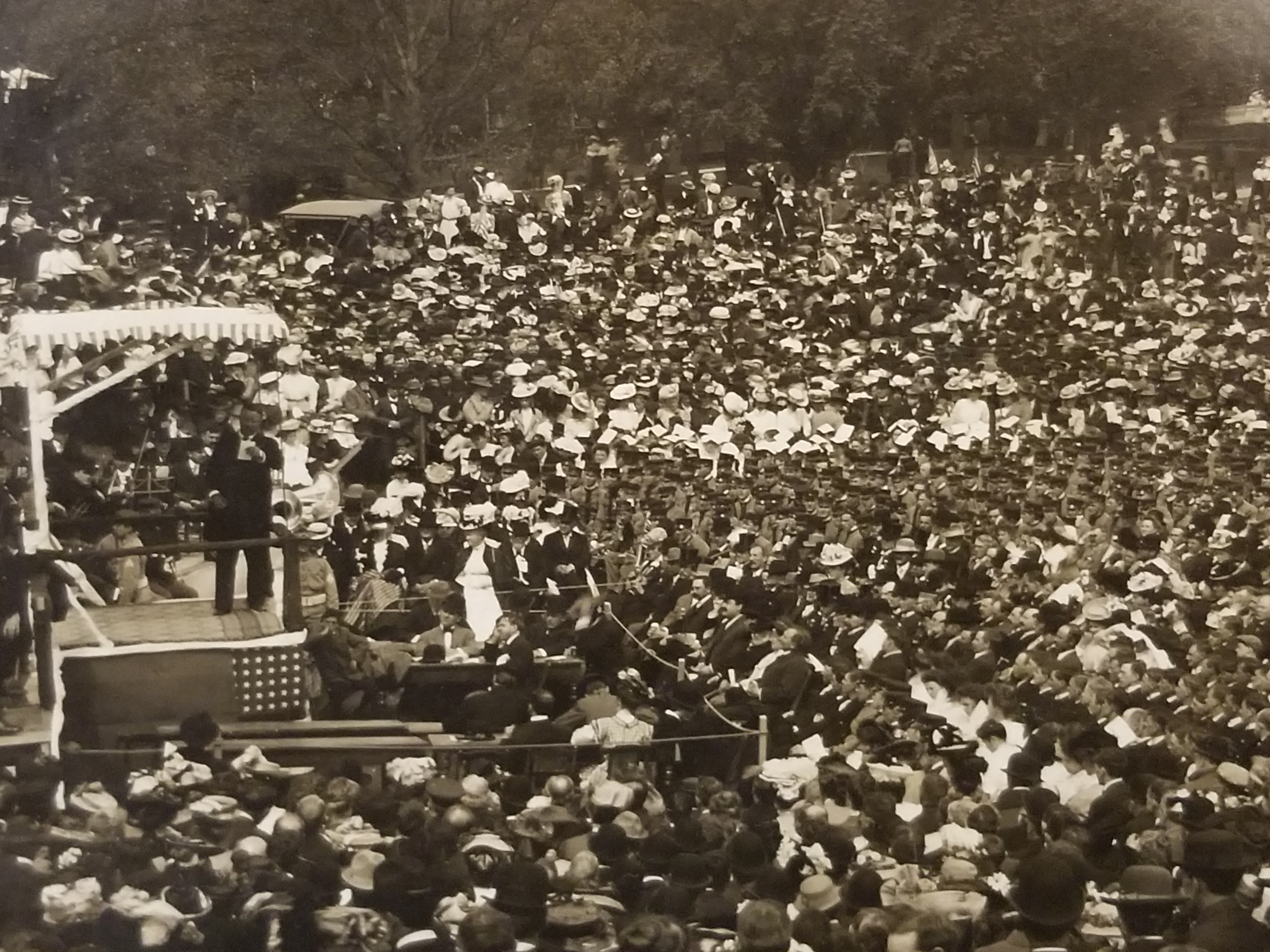 Semi-Centennial Celebration. The uniformed band is seated before President Roosevelt, 1907.

Following the school’s semi-centennial, and as a direct result of the disciplinary issues within the band, President Snyder assigned chemistry faculty member A.J. Clark to serve as the band’s director. In this era, the band continued as a cadet band and remained part of the Military Department in dress and drill. Clark set the tone of faculty leadership and, as a musician, added to the musical advancement of the ensemble. Into the 1910s, the band was able to travel with the football team to away games. In 1912, they accompanied the MAC football team to Columbus, Ohio to perform at the MAC-OSU game. A Columbus newspaper remarked, “never has there been a band on Ohio Field that can compete with the Michigan Aggie.”

The band had a few directors in this period: A.J. Clark, Frederic Abel, and J.S. Taylor. The MAC Music Department was created in 1919, with Taylor as its first director. In 1920, the department got its own building, a former faculty house on campus, fitted with a studio, practice rooms, and a recital space. The director of bands was a music faculty position starting in 1919 and directed the marching band in addition to the other bands on campus, though the marching band remained a unit of the Military Department and was drilled by a Military Department officer. In 1920, the band got a new look with khaki ROTC uniforms for the first time.

In 1925, Michigan Agricultural College became Michigan State College of Agriculture and Applied Science (MSC). At that time, the varsity letter was changed to a block-S. By 1926, the College decided to hold a contest to pick a new school mascot. The winning submission was the “Michigan Staters.” However, Lansing sports reporter George Alderton referred to a Michigan State team as the “Spartans” in an article on April 2, 1926. It became very popular among students and fans, resulting in the birth of the Michigan State Spartans.

The second known African American member of the Michigan State Band was Benjamin DeWitt Jones, who graduated with the Class of 1928 in liberal arts. Jones was an active musician in the Lansing and East Lansing area while a student at Michigan State, performing his clarinet and using his baritone vocal skills. Among his engagements in the mid-1920s were clarinet solos on WKAR, vocal performances for Lansing school groups, participation in Lansing Music Teachers Association recitals, gigs with the Lansing Women’s Club, and more. While a student in 1927, noted African American pianist Carl Diton gave a performance at the Lansing A.M.E. Church, at which Jones assisted with vocal and clarinet solos. Jones also performed with the Burnt Corkers travelling minstrel group while in Michigan. After leaving MSC, he continued to engage in music in Detroit with the Bethel A.M.E. Church, the Detroit Institute of Musical Arts, and was a pupil of famous baritone Louis Graveure. He was a native of Albany, Georgia, and his life post-MSC is largely unknown.

Also in 1925, the MSC Band got a new director in Carl F. Kuhlman. Kuhlman maintained the status quo for the most part. Early in 1926, Kuhlman decided to train a “second band” of beginner musicians who would then be more experienced come fall for the marching band season. By 1927, Kuhlman had lost control of the unsanctioned Swartz Creek Band, who were using College-owned instruments without express permission. Carl Kuhlman left MSC in mid-summer 1927. Hired to replace Kuhlman at the band’s helm was Leonard Falcone and thus began a new era for Michigan State Bands. 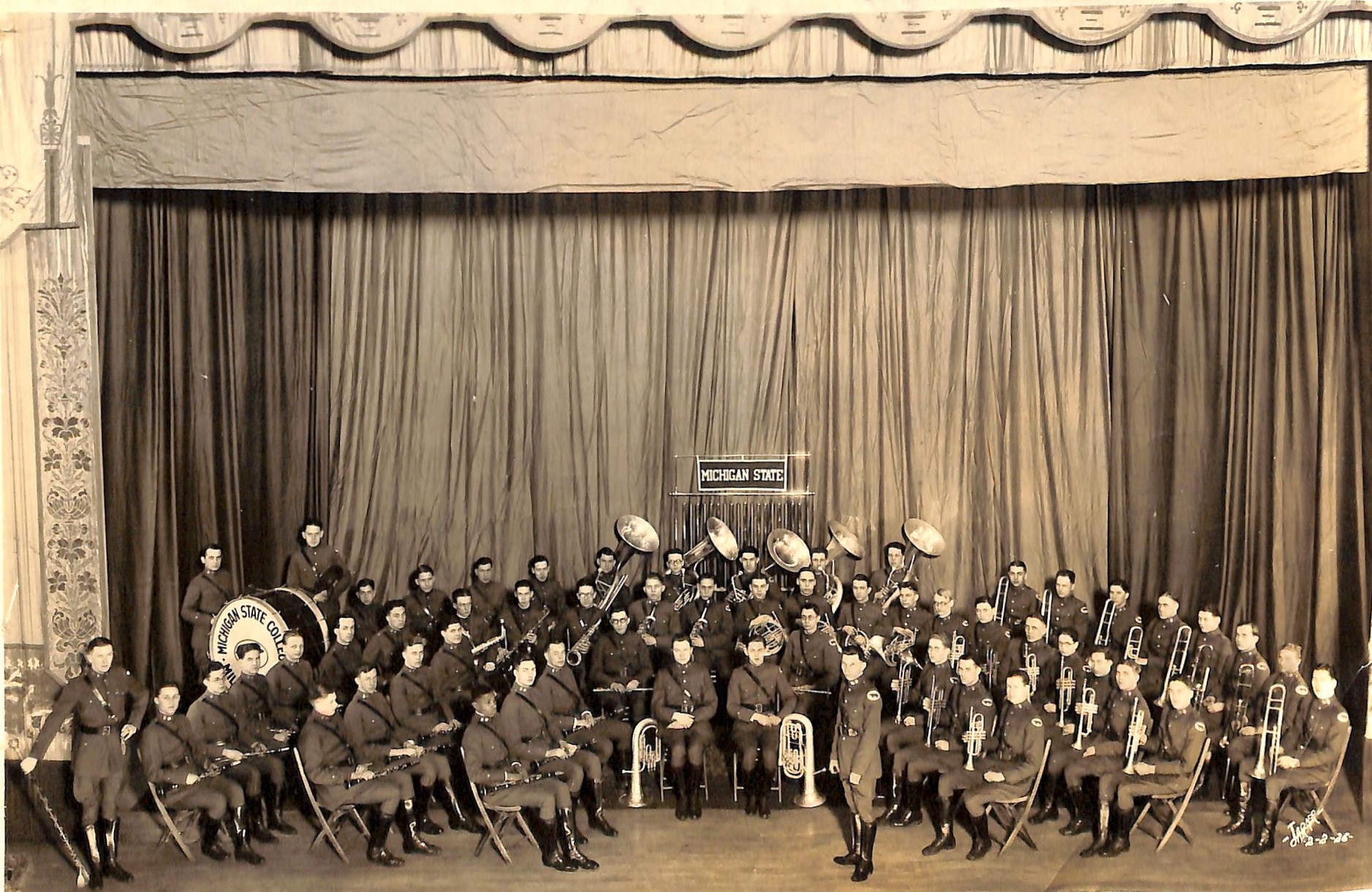