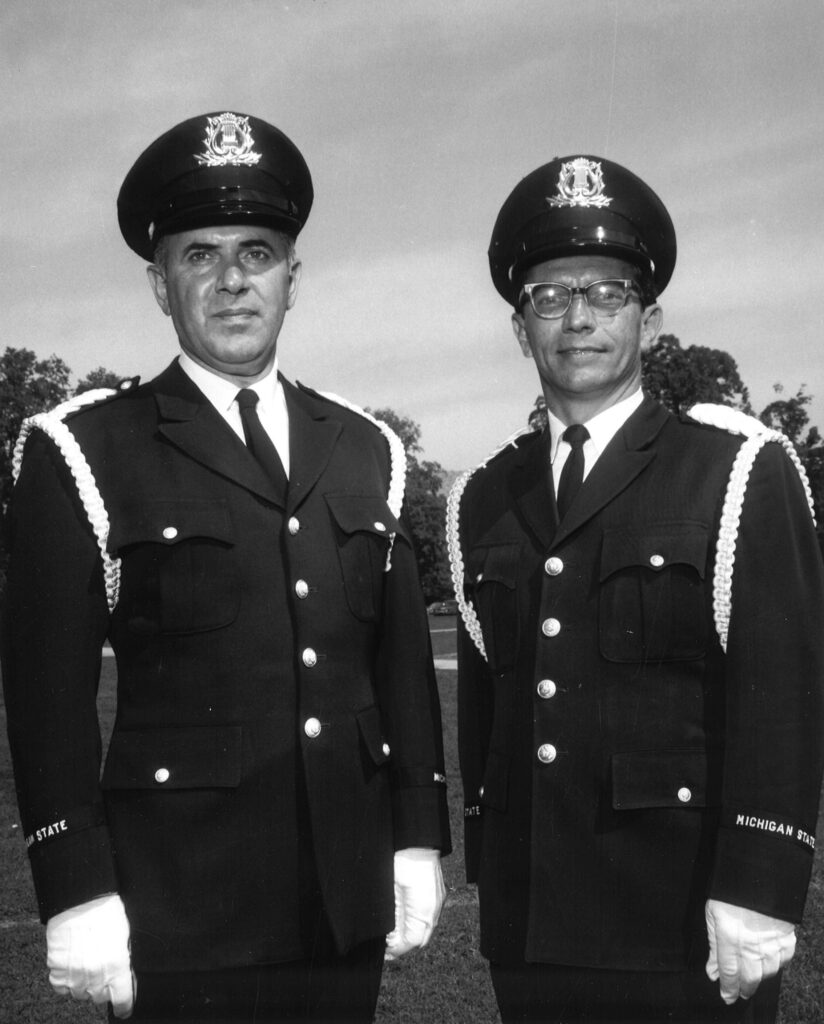 With the retirement of Leonard Falcone came a new era for the Spartan Marching Band. Michigan State University attracted and hired noted conductor Dr. Harry Begian to succeed Falcone as director of bands in 1967. Bill Moffit remained at MSU as assistant director of bands following Falcone’s retirement. While some changes occurred in this period, there was some structural continuity with the assistant director of bands retaining the day-to-day operation of the SMB. In a September 1967 interview with The State Journal, Begian said, “the word among the music trade is that Mr. Moffit and I will hit it off as a team and should have a band second to none, and that is exactly what we hope to do.”

In their first season together, Begian and Moffit implemented some new elements to the band. The directorial duo added eight E♭ cornets to the SMB in order to enhance the soprano voice in the band’s instrumentation. Moffit’s musical arrangements demanded a higher brass sound to fill the stadium and the Getzen Company sent the band eight cornets to meet their needs. Additional altered instrumentation included a decrease in clarinets and increase in alto and tenor saxophones.

Perhaps one of Begian and Moffit’s most innovative additions to the band in 1967 was the Big Ten Flag Corps. The Spartan Marching Band debuted ten new flags in its 1967 Homecoming performance. Each of the ten flags represented one of the Big Ten universities, emblazoned with the name of the school and its colors. Flags have been added over time to reflect the additions of Penn State, Nebraska, Maryland, and Rutgers to the conference. The fourteen Big Ten flags lead the SMB in all parades, including the gameday march to Spartan Stadium. The Flag Corps also leads the band on to the field of Spartan Stadium during the famous kickstep field entrance.

By 1968, the band had become a solely brass band, with the exception of alto and tenor saxophones. The band’s instrumentation is a distinctive feature which differentiates the Spartan Marching Band from other Big Ten and college marching bands.

In 1968, MSU and Spartan Marching Band alumnus Tim Skubick became the voice of the band. He announced at all SMB performances, including the highly recognizable pregame field entrance and halftime shows. Skubick continued as the voice of the Spartan Band until 1993.

In 1969, Bill Moffit resigned from Michigan State to take up new duties at the University of Houston. Left without an assistant director of bands, Dr. Begian selected two graduate students from the Music Department to assist with the Spartan Marching Band. In the fall of 1969, Joseph Parker became the assistant director of bands and Jack Seidler became the drumline instructor. This arrangement only lasted a single season, as 1970 brought about the departure of Harry Begian and Joseph Parker from Michigan State University.

The fall of 1970 brought the Spartan Marching Band its next major duo of directors. 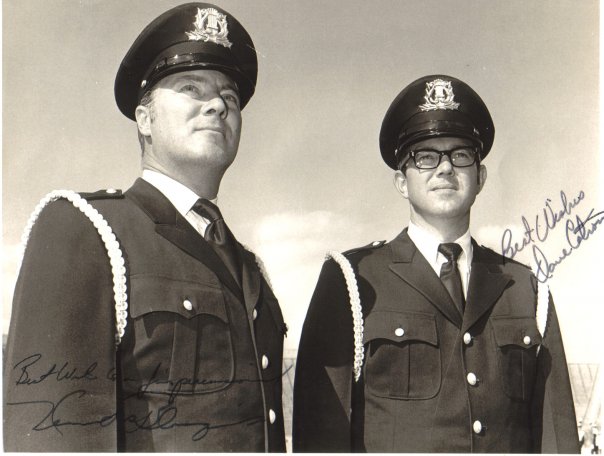 The fall of 1970 brought the Spartan Marching Band’s new directing duo, Kenneth G. Bloomquist and David Catron. For the most part, the status quo was maintained, with the assistant director of bands Catron running much of the day-to-day SMB operations.

By the fall of 1971, Bloomquist and Catron introduced some new annual traditions to the Spartan Marching Band’s season. In the 1971 football season, the first home game was held before classes started in the fall. Bloomquist’s solution to this problem was to recruit band alumni to assemble and perform at the first game of the season. The first ever MSU Alumni Band was billed as a celebration of the start of the second century of Spartan Bands, given 1970 marked the centennial of the band’s founding.

Also in 1971, the first annual Spartan Marching Band season-culminating concert was held. Today, the traditional concert is known as the “Spartan Spectacular,” but it did not get that name until 1977. Early on, the concerts were held at the MSU Auditorium, the occasional concert was held in the Breslin Center, but of late most have been held at the Wharton Center.

In 1972, the United States government enacted Title IX, a civil rights law which states “no person in the United States shall, on the basis of sex, be excluded from participation in, be denied the benefits of, or be subjected to discrimination under any education program or activity receiving Federal financial assistance.” While women had been admitted to the Concert Band since World War II, they had been denied the right to participate in the Spartan Marching Band until this law opened up the ensemble.

SMB directors Bloomquist and Catron were enthusiastic about the addition of women to the band, increasing the ensemble’s size and talent. The first two women members of the Spartan Band debuted in the fall of 1972. They were feature twirler Beth Mlynarek and alto saxophonist Lynne Charbonneau. The number of women slowly grew each succeeding season. 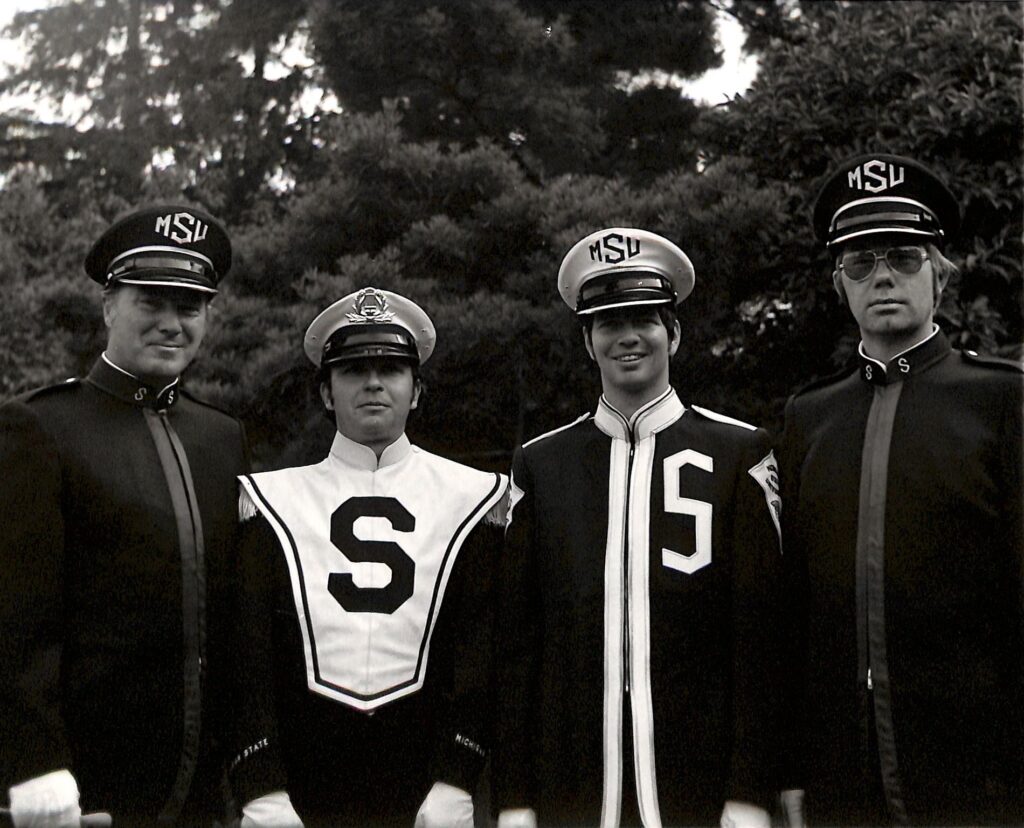 Kenneth Bloomquist (left) and Thad Hegerberg (right) pose with models of the outgoing and incoming uniforms, 1974

In 1974, David Catron left MSU to take up duties as director of bands at Wichita State University. Bloomquist hired Thad Hegerberg, a graduate student in the Music Department, to succeed Catron as assistant director of bands. With Bloomquist and Hegerberg at the helm, the 188-member Spartan Marching Band got new uniforms in the fall of 1974 after ten years in the vinyl overlay uniforms.

By 1976, the 212-member Spartan Marching Band began to add new dimensions to their traditional Patterns of Motion style. Various techniques, borrowed from competition drum and bugle corps, were put into use, and the music began to be correlated more carefully with visual aspects of the drill. Stride maneuvers, oblique marching, expanded full-field mirror drills, and curvilinear drills became integral parts of the new Spartan style. Corps style percussion, including pitched bass drums and tri-toms, were added to the instrumentation, in addition to new silver tubas.

Also in 1976, Bloomquist and Hegerberg added a working flag corps (or color guard) of 24 members to the band. The initial MSU flag corps was coed, and both men and women wore the regular marching band uniform. New white flags with a green MSU-shield were designed by the first flag corps instructor Steve Batdorff, who had formerly marched as a Big Ten Flag Corps captain.

On July 1, 1978, Kenneth Bloomquist became the chairman of the Music Department. As a result, he resigned as director of bands and hired Stanley DeRusha to fill the position.