In Fall 1967, following the retirement of longtime Spartan Marching Band director Leonard Falcone, renowned conductor Dr. Harry Begian was named director of bands at MSU. Dr. Begian came to MSU from his alma mater Wayne State University where he had been director of bands for three years. Begian together with SMB assistant director William Moffit directed the marching band from 1967 to 1969.

The end of Falcone’s tenure as director marked the end of one era and the beginning of another for the Spartan Marching Band. A number of changes were made in 1967 with Dr. Begian’s arrival at MSU. “The word among the music trade is that Mr. Moffit and I will hit it off as a team and should have a band second to none, and that is exactly what we hope to do,” Begian said in a September 1967 interview with the State Journal. Among Dr. Begian’s first actions as director was to add eight E-flat trumpets to the ensemble to enhance the soprano voice in instrumentation. Begian also decreased the number of clarinets in the Spartan Band and increased the number of alto and tenor saxophones.

Perhaps one of Begian and Moffit’s most innovative additions to the band in 1967 was the Big Ten Flag Corps. The Spartan Marching Band debuted ten new flags in its 1967 Homecoming performance according to the program from that game. Each of the ten flags represented one of the Big Ten Universities, emblazoned with the name of the school and its colors. Flags have been added over time to reflect the additions of Penn State, Nebraska, Maryland, and Rutgers to the conference. The fourteen Big Ten flags lead the SMB in all parades, including the gameday march to Spartan Stadium. The Flag Corps also leads the band on to the field of Spartan Stadium during the band’s famous kickstep field entrance. The Big Ten Flag Corps typically do not perform during halftime, however the section participated in the “Summer of 1967” halftime show this season to celebrate their 50th anniversary. 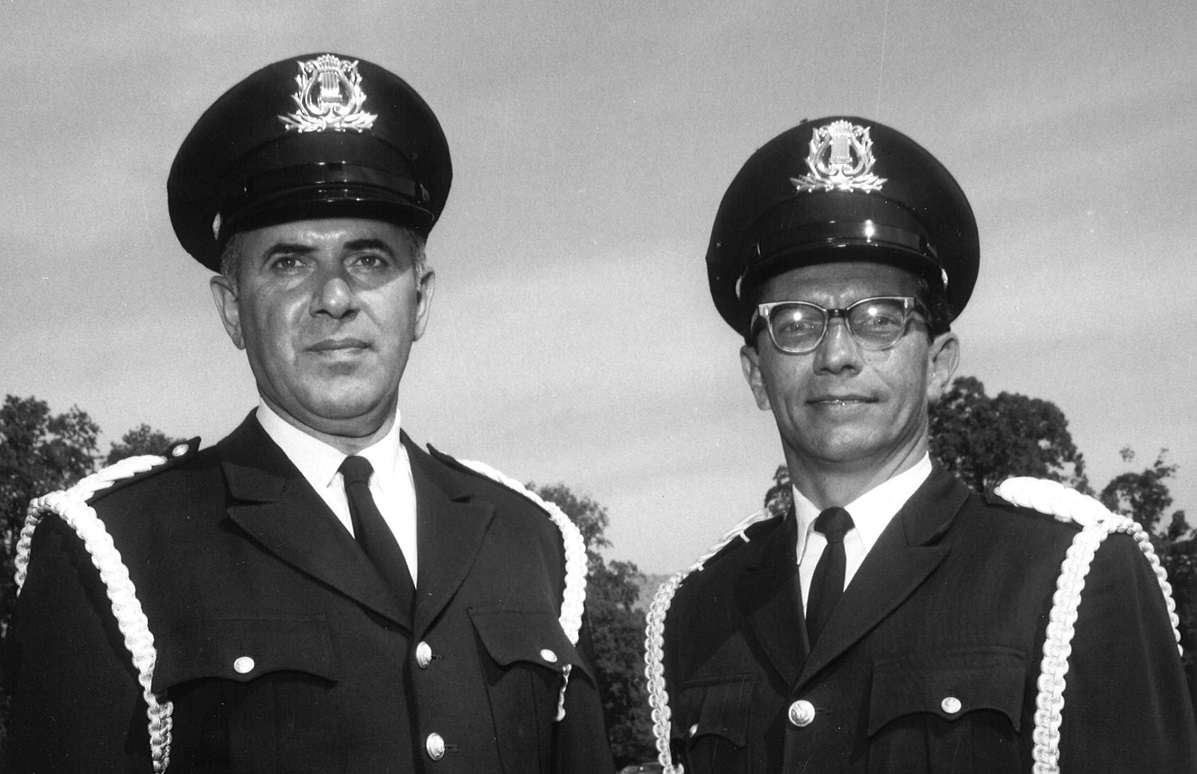 While the flags are a beloved tradition in the SMB, it is important to note that they are not unique to MSU. Purdue University originated the display of flags representing its Big Ten counterparts. Longtime Purdue director of bands Paul Spotts Emrick introduced the Big Ten Flags to the Purdue “All-American” Marching Band in 1919. The SMB and AAMB happen to have more in common than just the Big Ten Flags. The two bands share a director in William C. Moffit, who was the assistant director of the SMB, 1960-1969, and director of the AAMB, 1981-1988. Moffit made an indelible impact at MSU with his musical arrangements, including his arrangement of Victory for MSU, popularly known as “Pregame Fight” by band members. Moffit is also the innovator behind Patterns in Motion, the constant-motion four-person squad marching system, still used by the SMB in its pregame routine today.

With the 1967 season now 50 years behind us, the current Spartan Marching Band and its alumni can look back on the impacts a single season had on the band’s growth and future. Directors Begian and Moffit certainly left their mark on the band program at MSU. Moffit’s arrangements of many tunes are still performed by the SMB today and the band’s current instrumentation is a direct result of the changes Begian made during his first season. The most apparent impact on the band from 1967 is the addition of the Big Ten Flag Corps, a section of dedicated band members who carry the colors of our opponents and set the tone of intensity as the Spartan Marching Band moves down the street and onto the field of Spartan Stadium on gameday.